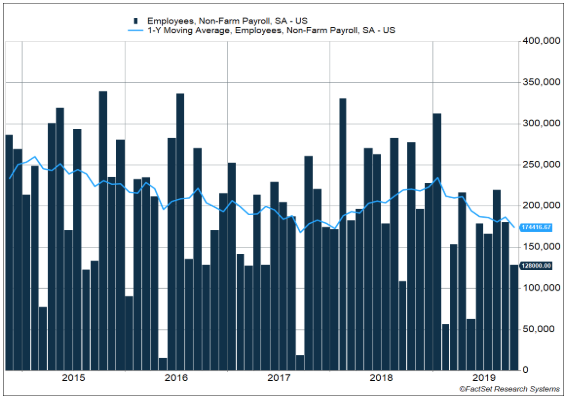 Better than expected jobs and GDP data coupled with an interest-rate cut was more than enough to push markets higher. The S&P 500 gained 1.5 percent. The MSCI ACWI index of global stocks climbed 1.3 percent. The Bloomberg BarCap Aggregate Bond Index edged 0.5 percent higher as expectations the Fed would need to cut rates again pushed rates lower. The S&P 500 rose 2.2 percent in October and is up 23.2 percent so far this year. Over the last year, the S&P 500 is up 14.3 percent after a big swing higher last month replaced a 6.8 percent decline a year ago. The combination of dropping a bad month and replacing it with a solid return swung one-year returns nearly 9 percent higher.

This week, the news slows down significantly. Australia and Great Britain have central bank meetings this week. Eurozone retail sales will indicate consumer optimism in Europe.

Football teams have playbooks, a document which contains all the plays and strategies used by a team. Some plays are designed to maximize the chance of gaining just a yard or two. Others are designed to get a first down when it is third and long. The Federal Reserve has a playbook of sorts, too. It details a series of options the Fed can take when it faces different economic situations.

When faced with an economy that’s slowing after a series of interest-rate hikes, the playbook first recommends to stop raising rates. If the economy continues to slow, cut rates three times and pause to see if the economy starts to pick up.

The Fed appears to be following the playbook very closely. The rate cut last week was the third 0.25 percent interest-rate cut in as many meetings. The Fed signaled it was likely going on hold for at least one meeting by changing the press release and reinforcing the idea of slowing down during the accompanying press conference.

The Fed’s decision to pause looked even wiser on Friday when the U.S. jobs report showed a stronger than expected labor market. The U.S. economy produced 128,000 jobs last quarter, well above expectations. The number was pushed lower by a strike against General Motors and the end of temporary jobs related to the U.S. census. Previous months were revised significantly higher. The labor market remains quite strong.

The labor market’s strength contrasts to weakness in data relying on business investment and trade. In the preliminary third-quarter GDP report, overall growth was 1.9 percent, which was better than expected, but less than desired. Consumer growth was reasonable, but weakness in business investment and trade kept growth below the 2 percent threshold.

Now that the Fed members have indicated they would like to pause, will they be forced to change their minds and cut rates at the December meeting? Based on the jobs data and GDP, a December pause seems likely. Whether they can avoid cutting rates in future meetings may be determined by trade negotiations with China. The Fed’s playbook doesn’t include much on how to use monetary policy to counteract the negative consequences of a trade war. Fed Chair Jerome Powell may be creating some new pages for the Fed’s playbook right now.

Quit Talking so Fast
It turns out languages spoken more quickly convey information to the listener at roughly the same rates as those spoken more slowly. Japanese is spoken very rapidly, but the more complex expression embedded in the language roughly matches the speed information is conveyed relative to slower-speaking languages. Languages that are spoken more slowly use simpler structure and convey ideas more quickly. Amazing how it all evens out.