Hopes for a trade deal were enough to push the S&P 500 past its previous high. The index gained 0.9 percent. The MSCI ACWI, the key global index, rose 0.4 percent. The Bloomberg BarCap Aggregate Bond Index rebounded 0.5 percent as economic conditions suggested a U.S. rate hike remains a long way off and inflation remains under control.

Perhaps the most interesting announcement this week will be the Federal Reserve’s release of minutes from its last meeting. Those minutes may contain additional clues regarding the Fed’s policy on cutting or raising rates at some point in the future.

What is the biggest shopping day of the year? Black Friday or Cyber Monday? The answer is neither. Singles Day, a Chinese holiday celebrating singleness that was co-opted by Chinese internet giant Alibaba, had more sales last week than expected from the combined total of Thanksgiving, Black Friday, Cyber Monday, and the weekend in between.

China has the world’s largest population and the second-largest economy. If its economy continues to grow faster than the United States’ by a wide enough margin, it will eventually topple the United States from the top of the economic rankings. More than half the copper mined in the world is used by China, and the country uses more than 40 percent of the world’s steel. It also manufactures a wide range of goods and uses machines and technology from around the world. China is important to the world’s economy.

This week’s data suggest China continues to grow rapidly, compared to the United States, but is slowing down from the torrid growth of the last decade. Industrial production, of which manufacturing is the largest component, rose 4.7 percent. That missed forecasts for 5.2 percent growth and was the slowest growth rate since 2002. Retail sales grew 7.2 percent but missed expectations. As the accompanying chart shows, retail sales used to grow at 11 percent per year. 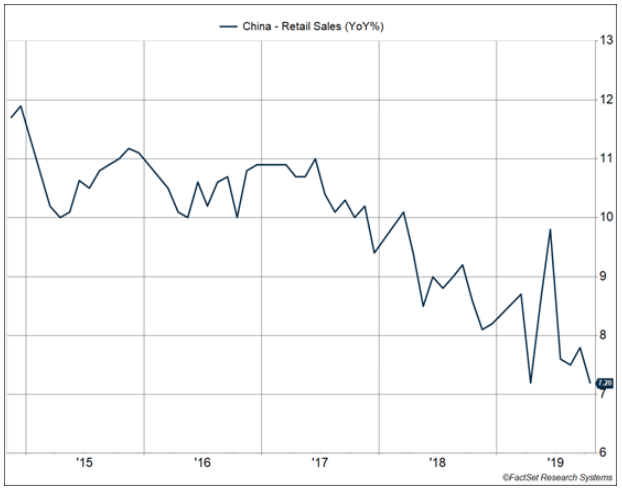 Growth has been impeded by the tariffs the United States has levied on Chinese goods. As the trade dispute has escalated, the challenges faced by the Chinese economy have increased. The disappointing numbers last week reflect signs U.S. policy toward China is exacting a greater cost on the Chinese than on the United States.

China’s challenges are, in turn, shared with the rest of Asia. Exports to China are larger than those to the United States from Japan, Taiwan, South Korea, and many other Asian countries. How well China is doing is important for global markets. Whether you remember China uses half of the world’s copper or can stump your friends with the magnitude of Singles Day, China’s size makes it important to investors.

Navigating the Buffet
Buffets restaurants have had a rough time. The company that owned Old Country Buffet, Hometown Buffet, and Ryan’s has declared bankruptcy three times since 2008. Maybe Americans are eating fewer carbs or want a fresher food. Or, perhaps the challenge is the line doesn’t move fast enough. The link shows different theories about the best ways to organize buffets for maximum efficiency. Who knew getting a piece of fried chicken, pot roast, and a dinner roll could be so complex?