Last week was quieter following the multiple major data releases and the Fed meeting the previous week. England and Australia left interest rates unchanged. The United States and Chinese trade data showed both economies continue to struggle with the effects of a trade war. Tariffs have made trade more costly, and corporations have slowed investment in the face of the uncertainty. Trade negotiations between the United States and China continue, and it appears a phase-one agreement that rolls back some tariffs in exchange for Chinese concessions will be reached.

As seen on the accompanying chart, productivity declined last quarter. Productivity measures the value of goods produced by workers. When it increases at a healthy pace, workers can receive wage bumps without companies needing to raise prices to earn the same profit. When wages rise and productivity falls, corporations often earn lower profits. 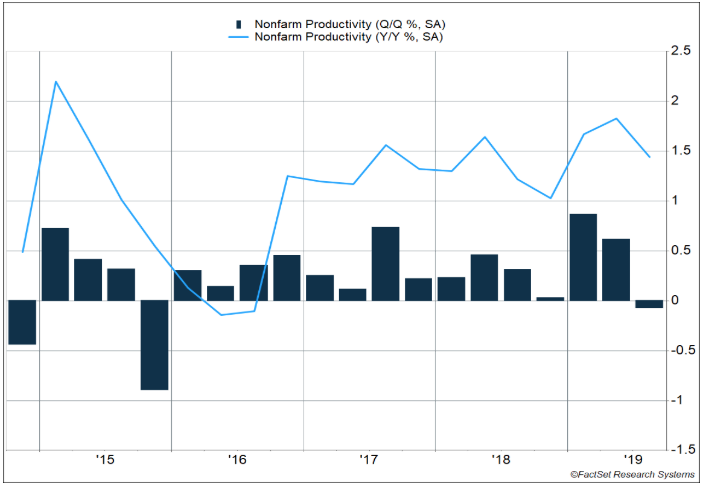 Three Pearls of Wisdom to Avoid

Nobel Prize winner Daniel Kahneman believes people make poor choices by relying on simple rules rather than thinking through complex challenges. An easy way to fall victim to this tendency is to rely on short sayings or aphorisms to guide your portfolio decisions. This week’s update will focus on three “pearls of wisdom,” which, upon closer inspection, aren’t genuine gems.

When the market hits new highs, investors invariably start wondering if they should cash in some of their gains and wait for it to go back down. It makes sense. The market has rallied, and portfolios have likely profited, so investors want to reduce risk and avoid the next tumble. This line of thinking ignores one fact: Investing for the long run only makes sense if markets keep hitting new highs. If markets don’t reach new highs, it means capitalism isn’t working to expand the economy, returns are trending toward 0 percent, and investors are fleeing stocks. Instead, data shows when markets close at a new monthly high, they tend to gain nearly as much the next month as they do when they haven’t hit any new highs. Historically, at least since 1980, investors who stayed invested fared better than those who didn’t.

Investors often believe there is some super-smart investor who is making a killing while the rest compete for what is left. The problem is the “smart money” is susceptible to the same risk as any individual, and it often adds some of its own. Smart money’s ability to make dumb moves was on full display when a Japanese investment firm with a long history of technology investing lost $4.7 billion.

Another challenge is the unreasonable trust in the wisdom and power of central banks. The Fed’s ability to forecast the economy isn’t very impressive. The European Central Bank has made rates negative to spur economic growth. But, the growth has been scarce as investors and consumers rightly wonder if an economy with negative rates is headed for an additional decline. Rather than spurring actions to speed the economy, negative rates have created a concern returns are headed lower; and, rather than spend more, investors feel they need to save more. The final result is a slowing economy and the potential for risk to be magnified by the very low rates.

Individual investors should stay focused on the plans they created with their advisors and ignore some of the “pearls of wisdom” offered by shortcut investing. Fortunately, many investors have done just that. Market volatility has declined in recent years, and one reason is advisors are helping investors stay focused on the long term. Avoiding mistakes others make can often be the best way ensure your investments are working hard for you.

Black Cat Scores Touchdown on MNF
The final saying we want to address head on is that black cats are bad luck. A black cat wandered onto the field last week during a Monday Night Football game between the Dallas Cowboys and New York Giants. Sure, neither the Giants nor the Jets, who both play in the stadium, have a winning record at home. It is also true only two playoff games have been played in the stadium and one of those was the Super Bowl that didn’t involve a New York team and the other was played prior to the cat being born. But, research shows black cats can do well in the NFL. The Carolina Panthers, whose mascot is a black cat, are doing fine and are reportedly interested in signing the cat as a free agent.