The global economy continues to slow rapidly, based on key data released last week. In the United States, retail sales dropped 16.4 percent from March to April. Individuals cut back on purchases due to risks from the coronavirus, lockdowns, and declining income from job losses. The drop increases to 21.6 percent when compared to one year ago. Industrial production showed similar weakness, falling 13.7 percent.

China reported the same economic measures last week, and the results were mixed. Retail sales in China dropped 7.5 percent from a year earlier. Industrial production increased 3.9 percent as factories and activity picked up amid a gradual economic reopening. While better than the United States, the weak retail sales mean China is not poised to lead the market higher.

This week’s data releases will likely be less impactful than those from the last two weeks. Initial unemployment claims, which are released each Thursday, remain stubbornly high. The most important economic figure will likely be the number of new coronavirus cases. As states move toward greater economic activity, any spike in virus cases may push the recovery further out.

The magnitude of the economic decline and the changes wrought by the coronavirus can be hard to fathom. Stocks drop and then rebound. Lesser known companies have become household names. People used to worry when someone with a mask on came into a store; now it is the opposite.

One way to make the shifting landscape more understandable is to think of the market as being shaped by two different races:

Governments responded to the virus with programs to ease the economic challenges and keep people employed. Those programs have helped prop up economies and alleviate some of the pain. However, the decline in activity is quite large. The retail sales data showed just how quickly the consumer has been forced to retrench. Retail sales declined 16.4 percent from last month and 21.6 percent from last year. Nearly every major retail category experienced a significant decline. Some areas were hit extremely hard. Compared to last year, clothing purchases declined nearly 90 percent. Home furnishings and electronics sales declined more than 60 percent. Restaurant sales shrank nearly 50 percent. 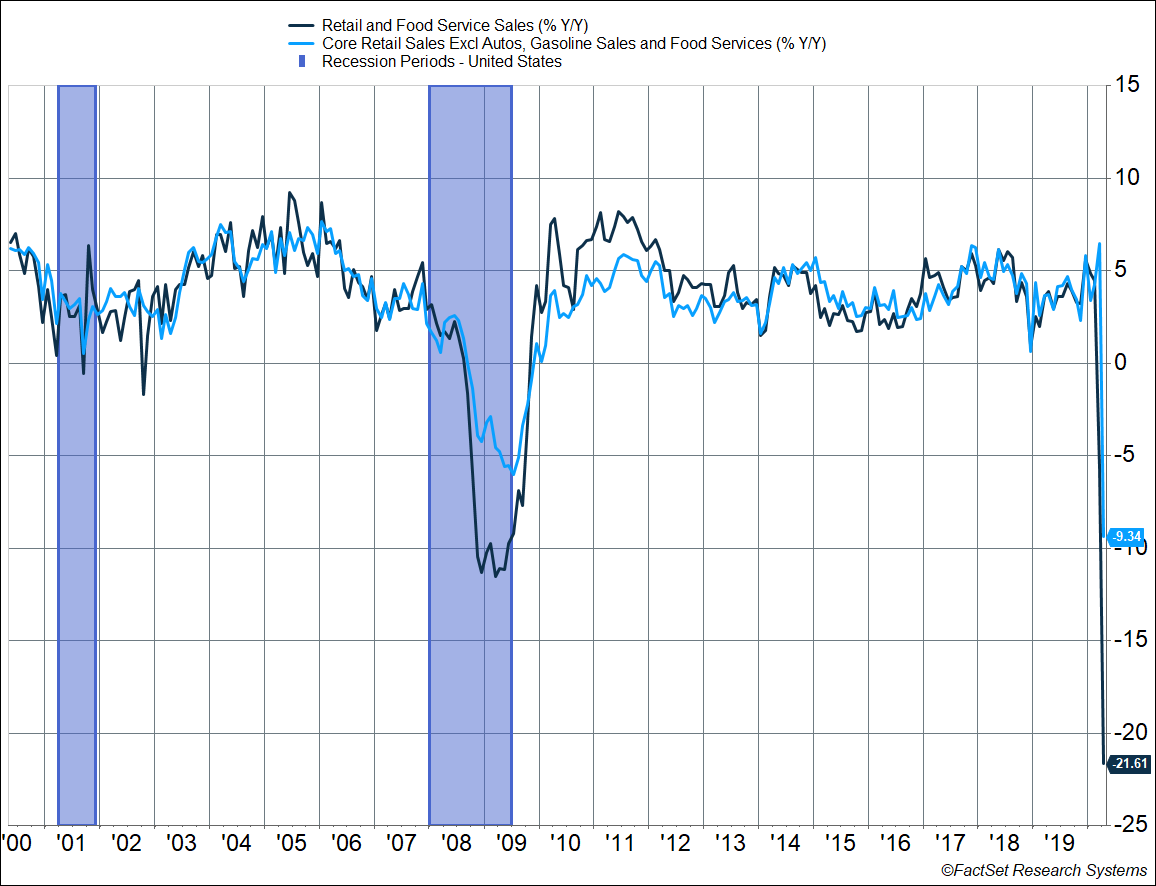 The economy will win the second leg of the race if it can expand while maintaining the gradual decline in active cases. Nearly every state and many countries are taking steps to relax the terms of their lockdowns to spur faster growth. Increased testing and precautions that don’t reduce economic activity, such as wearing a mask, will address the challenge of additional virus cases from increased contact. However, it was sobering that China’s retail sales dropped more than 7 percent even though China has far fewer new cases than the United States.

Finally, the winner of the third leg of the race will be determined by whether the virus is vanquished, or its threat severely lessened, by a major innovation – either a vaccine or a therapeutic – that reduces the risk widely enough to make things safer and return the economy to normal functioning.

The other race is between incumbents and disruptors. This race started long before anyone knew that “social distancing” wasn’t just a term to describe a junior high dance. The disruptors have been winning for a while, but the coronavirus seems to have sped up expectations the disruptors will carry the day.

Internet retailers, video streaming services, and gaming sectors are all performing well while traditional channels lag. The retail sales data showed internet purchases were up more than 8 percent on the same day a department store filed for bankruptcy. A recent report showed a video conferencing company started less than nine years ago is now worth more than the world’s seven largest airlines. The audience for live video games is growing while baseball fans wonder if their season will even start.

The rally off the March lows reflects a powerful market sentiment toward the economy winning the first race and the disruptors winning the second. The S&P 500 is up 28.4 percent since its low. The increase reflects confidence in the response from the Federal Reserve and the collaboration between the President and Congress. It also reflects some expectation the economy will make some strides against the virus. The market has also bid up the prices of disruptors compared to incumbents. Technology stocks are up more than 20 percent in the last year, while financials are down more than 20 percent. Health care stocks are up more than 17 percent, while industrial companies are down a similar amount.

But, expectations can get ahead of themselves on both fronts. We expect economic data to start improving in coming months. Retail sales should benefit from the reopening. The question is, will sales bounce back quickly enough to pull many of the temporarily unemployed back to work? Or, will the slowdown remain and consumers keep their spending low as a response to uncertain economic times?

The outcomes are uncertain, and our response should reflect that uncertainty. Our sense is investors may be getting ahead of themselves. Maintain a balance in your portfolio that reflects the risk in the economy, and be sure diversification between disruptors and incumbents remains a key part of your portfolio.

The German language boasts many unique words with oddly specific meanings. You may be familiar with some German words that have become part of the English language such as schadenfreude (finding joy in other people’s trouble), wanderlust (an impulse to travel the world), and weltschmerz (sadness about the state of the world).

Amanda Sloat of ForeignPolicy (FP) reported the Germans have invented a new word to describe debates about when and how to reopen the world: Öffnungsdiskussionsorgien.

The goal of many leaders around the world is to minimize infection, minimize death, and minimize economic hardship. It’s a tall order and there is no ‘right’ answer. One thing is clear, though. People who have been on lockdown, no matter which country they reside in, have cabin fever. FP reported:

“An American expat in Spain promised her teary tween that for her 12th birthday she could help take the trash 50 yards to a communal receptacle across the courtyard; that special gift was scrapped after a police car parked nearby. To take advantage of exemptions allowing owners to walk their pets, one person in Romania took his fish on a walk, while a young woman put her cat in a bag to justify a trip to the mall.”

In the United States, Buzzfeed and BoredPanda have reported on an abundance of pandemic jokes and memes. Americans have watched Michigan’s Father Tim Pelc use a squirt gun of holy water to bless Easter baskets from a socially safe distance. We’ve also been alerted to the possibility of a baby boom that will yield Quaranteens in 2033 and endless rounds of toilet paper jokes.

Concerned about your financial future?