The U.S. jobs report confirmed what was already known: millions of Americans are losing their jobs. The monthly payrolls report estimated a decline of 20.5 million jobs last month. The unemployment rate rose to 14.7 percent, which is estimated to be the highest since the Great Depression. A broad measure of employment estimates 51.3 percent of Americans have a job.

The crucial question is whether these job losses prove permanent or temporary. People laid off in April anticipate returning to their jobs in the near future. Seventy-eight percent believe their layoffs are temporary. If this generally proves true, the economy should bounce back more rapidly. Longer and more permanent layoffs would lead to a slower economic recovery.

This week’s releases offer a number of interesting data points. Korea, which has been successful in controlling the coronavirus, reports employment data. China shares retail sales and industrial production data on Thursday followed by the United States releasing the same data points on Friday. Because China is further along in its fight against the coronavirus, its data will provide some insight into how quickly the global economy may bounce back.

April’s employment report speaks to how quickly a pandemic can change the course of economic activity. Two months ago, unemployment was at 3.5 percent, a 50-year low. It is now estimated to be at an 80-year high.

Non-farm payrolls dropped by 20.5 million. The numbers were widely expected as unemployment claims leading up to the week of the employment survey had set new records. The accompanying chart shows the magnitude of the job losses compared to the steady gains seen over the previous years. The sharp drop in the number of people employed flowed through to the unemployment rate, which rose more than 10 percent, from 4.4 percent to 14.7 percent. 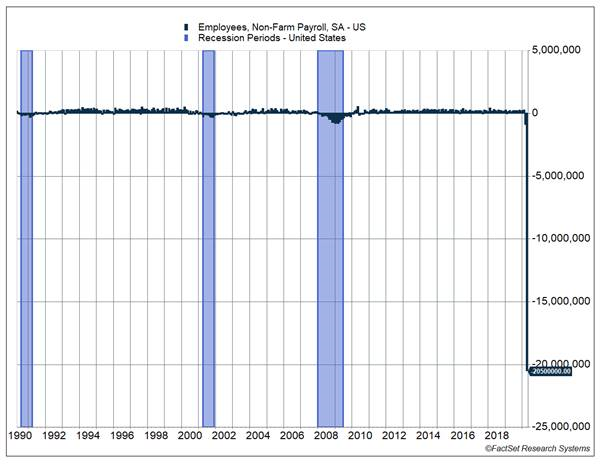 The actual unemployment rate is probably higher than the reported data. The confusing part of the report is a large number of those interviewed indicated they were employed but absent from work rather than not working. The survey writers wanted people in that situation to say they had been temporarily laid off. Unemployment would be around 19.5 percent if these additional people were added in as unemployed. There were also 6.4 million people who left the labor force and weren’t looking for a job. That group isn’t counted as unemployed, throwing further confusion into the data.

The leisure and hospitality industry has been hit the hardest. More than 7 million jobs have been lost, which is 47 percent of total employment in the sector. The other services category saw a 21 percent decline. The closure of salons in most states and reduced demand for dry cleaning pressured these industries. Most other industries saw declines around 10 percent.

The magnitude of the job losses was heightened by the closures of businesses and schools. During past recessions, schools didn’t close and universities didn’t send students home. But, during this crisis, those industries also adjusted payrolls lower instead of stabilizing employment trends.

One way to look at the data is to analyze the percentage of working-age Americans employed. It dropped from around 61 percent to 51 percent over the last two months. This ratio is likely to dip below 50 percent next month given current employment trends.

At a broader level, the data reinforced the decision by governors and mayors to reopen parts of the economy. The rhetoric around reopening has become a hotly charged political issue. Some governors are loudly proclaiming a reopening of their states. Others are affirming the lockdowns and adjusting the rules to allow more activity. Either way, states are moving toward allowing more activity.

The crucial point now is not the degree of job losses, but how quickly those out of work are able to return and whether a resurgence in new coronavirus cases allows them to stay. Seventy-eight percent of those losing their jobs viewed their situation as temporary. But the longer people are out of work, the more severe the long-term economic consequences become.

This virus is a powerful foe, and we are concerned the rapid market recovery means investors are expecting the economy to improve more quickly than it actually will. We expect some activities that have manageable risk will bounce back quickly. Other activities, such as travel and sporting events, are expected to recover more slowly.

History suggests it’s advisable to take a hard, fact-based look at the situation and then mix in some optimism. The optimism stems from the knowledge most problems are managed, mitigated, or simply overwhelmed by innovation or some other positive event. Past pandemics, albeit much smaller-scale, have been followed by rapid economic recoveries. Capitalism creates powerful incentives for businesses to find solutions for their customers. And, there is no shortage of effort being made to find the innovations necessary to put this virus behind us.

THE BETTER ANGELS OF OUR NATURE

In his first inaugural address, President Abraham Lincoln urged unity, saying: “We are not enemies, but friends. We must not be enemies. Though passion may have strained it must not break our bonds of affection. The mystic chords of memory, stretching from every battlefield and patriot grave to every living heart and hearthstone all over this broad land, will yet swell the chorus of the Union, when again touched, as surely they will be, by the better angels of our nature.”

During the coronavirus crisis, we have seen remarkable generosity. From first responders manning the front lines, at significant personal risk, to companies and individuals taking actions that help others. Since the virus began to spread, news organizations have been sharing stories about generosity, innovation, and appreciation. Here are a few from Good News Network and The New York Times:

What acts of kindness and generosity have you seen, read, or heard about?