The jobs market rallied back far sooner and stronger than expected. The U.S. economy created 2.5 million new jobs in May. Economists had projected a loss of 7 million jobs, so the surprise was massive. The gains are mainly attributable to workers who were temporarily laid off being called back to work as lockdowns ended or were relaxed.

The European Central Bank (ECB) announced plans to continue to buy bonds in order to promote liquidity and economic growth. The ECB is now on par with the Federal Reserve for how much support it is providing its economy. The global economy continues to wrestle with declining trade. U.S. exports and imports both dropped double digits last month.

The Federal Reserve meets next week. We are often asked whether we expect the Fed to lower rates below zero or announce other measures to stimulate growth. Our expectation is the Fed will not lower rates below zero now or in the future. Countries with negative rates haven’t seen strong gains in economic growth or in their stock markets. Central banks have plenty of tools available that will have more effect. Of particular interest is a program already announced to help mid-sized businesses. Helping those companies get through the slowdown and spurring rehiring is a key goal as Americans seek to revive the economy.

MISSED IT BY THAT MUCH

May’s jobs report was full of positive surprises. As shown in the below chart, the economy produced 2.5 million new jobs, trouncing economists’ expectations it would lose seven million jobs. Rather than rising to nearly 20 percent, unemployment dropped to 13.3 percent. 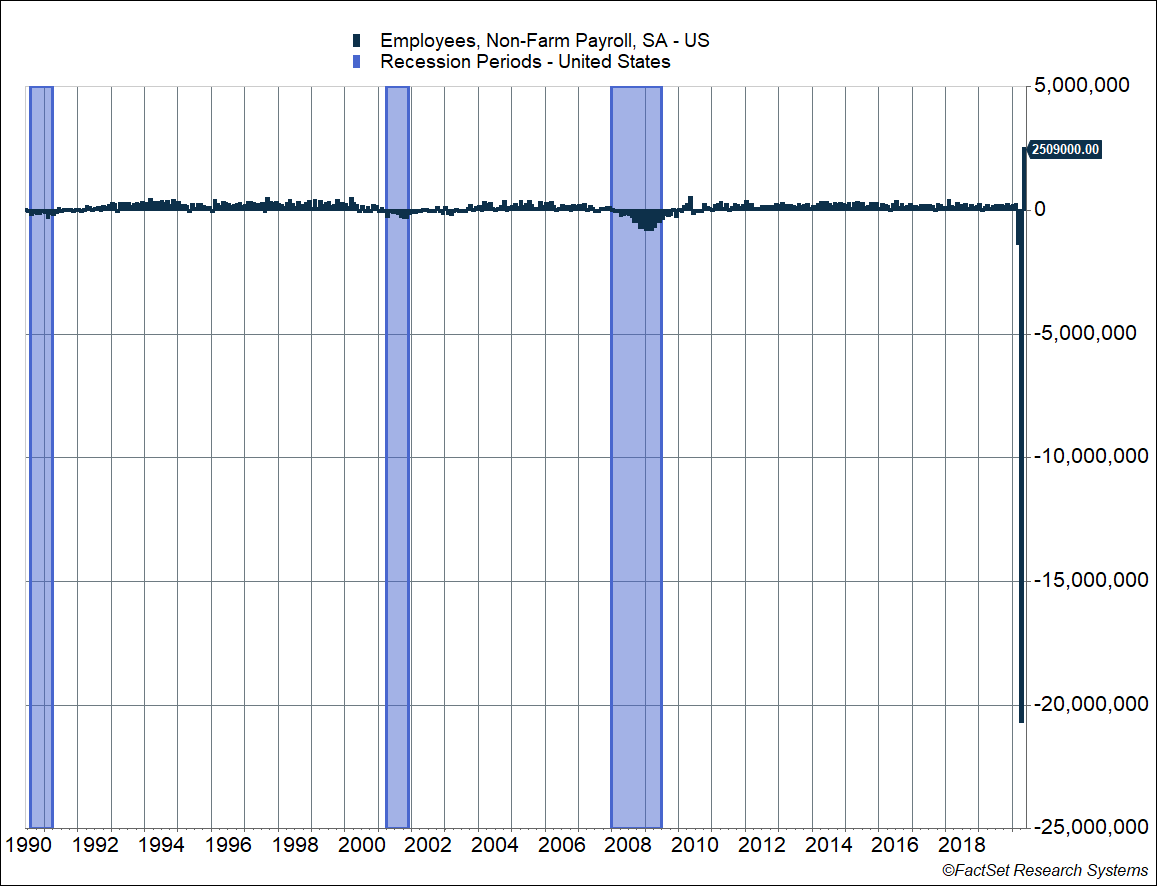 Put another way, economists projected the second largest monthly job loss in history and the economy experienced the largest gain instead. It brings to mind fictional secret agent Maxwell Smart, who would gesture to imply the results barely missed expectations and utter, “Missed it by that much” when faced with evidence of a wide gap between his expectations and reality.

Roughly half of the gains were tied to restaurants, which brought back 1.4 million workers. Many states had begun easing lockdown restrictions, and the reopening of restaurants brought back about 15 percent of the losses the broader leisure and hospitality segment experienced in April. Construction jobs increased nearly half a million, and health care jobs increased nearly 400,000 as dentists and other providers of mostly elective services brought back staff.

The jobs report is supporting optimism the economy has bottomed and will recover faster than originally expected. The surprising swing upward was likely due to a number of factors working together to push employers to bring workers back:

The unquestionably positive report establishes the economic bottom came in April and the economy has initially proved more resilient than expected. Underneath the topline numbers are a few key underlying trends we are watching closely. The most important is whether workers’ expectations layoffs will be temporary hold true. In April’s report, 78 percent of the unemployed believed their situations were temporary. That proved true for roughly 2.7 million workers called back to their jobs, and now 73 percent expect to be called back.

The rally in the job market has improved our outlook for the economy. The economic bottom reached in April is expected to hold, and the initial bounce back, which we anticipated for June, came early. Because the absolute bottom wasn’t as deep as expected, the long-term economic damage will likely be lower.

In order for the rapid increase in economic activity to continue, the United States needs to see declines in the number of coronavirus cases. Instead, the number of cases has plateaued just above 20,000 per day. The global trend in new cases is decidedly worse. Brazil has become the epicenter of the virus spread, and global new cases are at all-time highs. This month’s trade data showed exports plunged 20.5 percent. These numbers will likely improve in future months, but a rapid recovery needs greater economic activity across the globe in order to sustain high growth.