The daily total for new virus cases topped 40,000 as a resurgence in the South and Southwest pushed new cases to an all-time-record high. Some states are reporting record hospitalizations and pausing or reversing reopenings. Initial unemployment claims, as shown in Figure 1, remain close to 1.5 million. Existing claims dipped below 20 million, but only barely as the labor market seems to be healing slowly. Consumer spending rebounded 8.2 percent in May after falling 12.6 percent in April. Even with the increase, consumer spending remains 9.3 percent below year-ago levels. 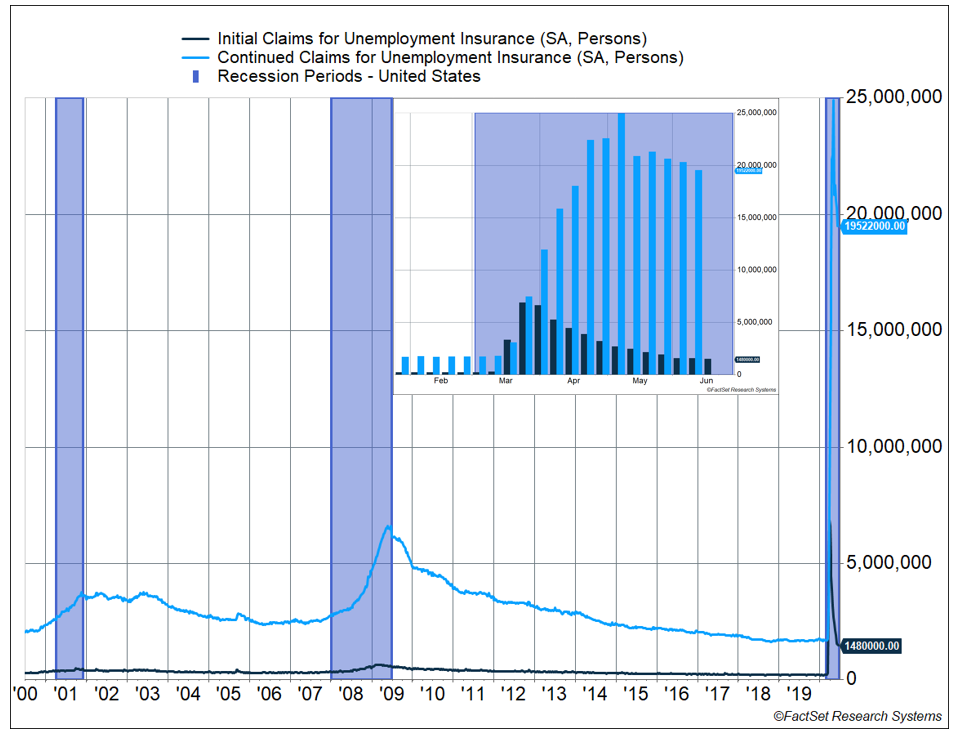 Some social media stocks tumbled last week as nearly 100 brands announced they are pulling advertising to spur the sites to tighten hate speech policies. Momentum from the broadly supported protests concerning racial discrimination has extended into other areas.

The U.S. employment report is the top data release during a holiday-shortened week. Expectations are for robust job growth as economic restrictions are looser than they were in May. Current expectations are for 3 million new jobs to have been created or, perhaps, reclaimed from the large losses in April. Investors may also gain additional insight into the Fed’s views as a number of Fed governors are speaking this week and the minutes from the last meeting will be released.

PLAY BALL! (BUT FIRST, HERE ARE THE NEW RULES!)

Major League Baseball announced last week it would begin a 60-game season. For baseball fans, it was very welcome news and represented a step back to normal. But, this will be a new normal. National League teams will have to adapt to a designated hitter. Extra innings will begin with a runner on second base. There are no plans for fans to attend the games.

The same is true in the broader economy. The economy is opening up and Americans need to adjust to the new rules in order to extend the economic gains. Unfortunately, those adjustments have proven difficult for many. The number of daily new cases set new records and is now more than 40,000 per day. California, Texas, Florida, Arizona, and other states have seen a surge in cases. The most recent victims have tended to be younger adults. The median age of new cases in Florida last Thursday was 34.

Texas and Florida announced plans to slow or step back some reopening measures. Bars were targeted in both states as evidence suggests poorly ventilated areas, such as bars, are likely to result in the virus spreading.

The surge in cases is likely to cause slower job growth in future months. Increased unemployment, if businesses close again, will slow the economy, as will people adjusting their behavior if the virus continues to spread. As Figure 1 above shows, weekly initial unemployment claims remain very close to 1.5 million. Initial claims have remained above 1 million for 14 straight weeks. Continuing claims dipped below 20 million. The employment situation remains volatile as many people are being rehired, but others are losing their jobs.

The longer people remain unemployed, the greater the expected economic damage. That makes the U.S. employment report the biggest update this week. The report, based on surveys taken three weeks ago, is expected to show gains of 3 million jobs. If the report meets expectations, it will surpass the surprising 2.5 million gain in May and help to reverse the over 20 million jobs lost in April. The gains seem likely to be strong. Some states had barely started reopening their economies when the May survey was done. Even those that had begun to reopen have generally eased restrictions further since the May report.

The market and economic effects of the surge in new cases have already begun. The S&P 500 dropped more than 2.4 percent on two separate days last week. The surge undercut the assumptions implied in current prices. Economic reopening was expected to put some upward pressure on cases, but other efforts were expected to keep the trend moving lower. Even with last week’s decline, market expectations seem to remain optimistic and vulnerable to a broader increase in cases.

Last week’s data reminds us this recession is different from those in the past. During the financial crisis, people returning to bars was a good sign as it reflected confidence in their economic situation. As people spend, income flows to others and the economy recovers. Under the new rules, increased economic activity only benefits the long-run outlook if it can be done in a low-risk fashion.

Think of this economy more like an injured player rehabbing an injury rather than an out-of-shape player who needs to get in shape. Like an injured player, our recovery to a new normal may be most rapid if we avoid previous normal activities that create a high risk of reinjury and a longer-than-expected recovery period.