Coronavirus actions and reactions continued to swing economic data in the United States. Consumer spending dropped 13.6 percent in April. It was the sharpest decline on record dating back to 1959. Income moved in the other direction last month. The combination of direct checks from the government and unemployment programs counteracted an 8 percent decline in wages and salaries from job losses. Weekly initial unemployment claims continue to fall but remain stubbornly above 2 million per week.

The European Union proposed €750 billion ($824 billion) in fiscal stimulus to support the eurozone’s recovery from the coronavirus. Japan announced further stimulus, too. The coronavirus epicenter continues to migrate as Brazil has had more new cases than the United States in recent days.

In what seems to be a regular pattern, investors focused on the signs of recovery and hopes medical advances will spur a return to economic strength. The S&P 500 gained 3 percent last week and rose 4.8 percent last month. Global stocks welcomed the news of additional economic stimulus, and the MSCI ACWI soared 3.6 percent. The ACWI finished 4.3 percent higher. The Bloomberg BarCap Aggregate Bond Index rose 0.2 percent and added another 0.5 percent to the month.

The gains pushed the S&P 500’s loss to just 5 percent this year, and the MSCI ACWI is down only 9.2 percent. The rally in U.S. stocks has been narrow. While gaining ground in recent weeks, small companies and value stocks are underperforming the S&P 500 by 10 percent to 20 percent for the year.

The biggest data release this week is the U.S. Employment Situation report on Friday. The report is expected to show unemployment reached 20 percent. The value of the report is lower in the fast-moving COVID-19 world. The information was gathered three weeks ago, so it doesn’t reflect any of the reopening activity. The release is still very important as the detail on activity within industries gives us insight regarding which industries are starting to recover.

HOW WELL DO YOU HANDLE UNCERTAINTY?

One of the differences between risk and uncertainty is risk can be measured or modeled. Issues become uncertain when a lack of data or inconsistent processes make probabilities impossible to estimate. The personal income data last week reflected the economic uncertainty facing the globe and the tendency for many to hunker down and save money when facing an uncertain future.

As the below chart shows, people had more money to spend last month than in the month prior. March’s more than 2 percent drop in personal income was dwarfed by a 10.5 percent increase in April’s personal income. How could income rise when people are losing their jobs? Because the government stepped in and sent people checks. Government transfers surged $3 trillion because of $1,200 stimulus checks and heightened unemployment benefits. This more than overcame a 7.7 percent decline in employee compensation and a 12.2 percent drop in proprietors’ income. 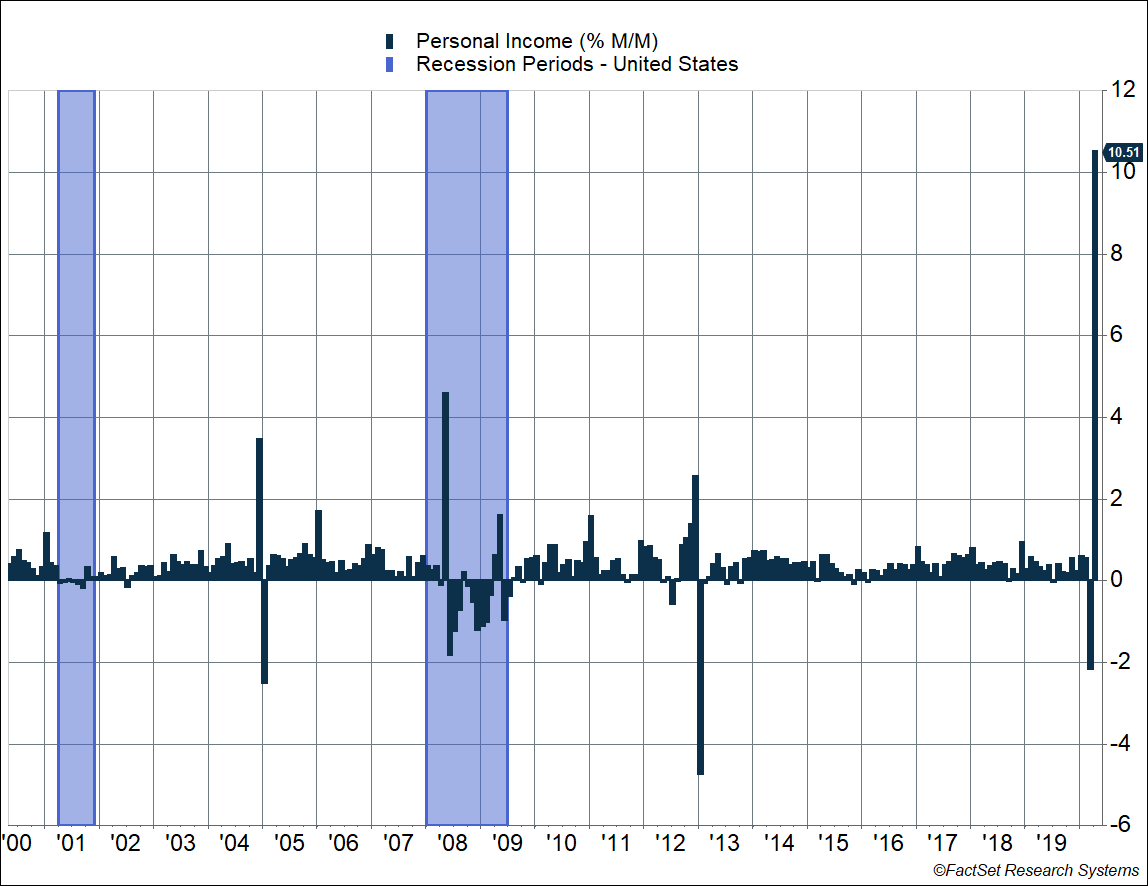 The large gap caused by decreased spending and increased income resulted in a huge spike in savings. The savings rate reached a record 33 percent as people responded to uncertainty by storing large portions of the extra income. Certainly, the lockdown contributed to the slow spending. If a restaurant isn’t open, it is hard to go out to eat. More impactful is the uncertainty faced in venturing out to spend money at open businesses. Until that uncertainty becomes quantifiable, people will likely venture back slowly until they feel confident enough in the processes designed to protect them.

Those venturing out by necessity or choice play an important role in opening up the economy. When someone finds it necessary to take a flight and reports things were fine and data backs that up, more people will return to travel. If people go out to eat and feel safe, more will follow.

Overall data is trending toward fewer cases and higher rates of testing. The number of daily new cases is dropping slowly but is partly heightened by the steady increase in people being tested. At the start of May, the United States was running around 275,000 tests per day and about 10 percent were coming back positive. A month later, testing rates are closer to 400,000 and only 5 percent are coming back positive.

Speed matters in the race between the virus and the economy. A slow recovery won’t come fast enough to keep enough workers who see themselves as being “temporarily” unemployed from being “permanently” unemployed. Faced with that uncertainty, people will keep spending slowly, and the recovery will take longer.

The tendency toward hunkering down in the face of uncertainty is natural for an event like COVID-19. No one can change policy and make the virus go away. Uncertainty can also cause protests when leaders deliberately change the rules, apply the rules insensitively, or enforce the rules inconsistently.

In recent weeks, China announced plans to rein in more freedoms in Hong Kong. Previous protests had succeeded in slowing China’s adjustments of the rules of the territory. Perhaps sensing the world was focused on COVID-19, China sped up the process. Hong Kong citizens sensed the threat. On a much smaller scale, the United States saw protests of state governments that some felt were slow to open back up and create job prospects.