The S&P 500 dropped 4.7 percent last week on concerns the uptick in new coronavirus cases would persist and slow the economic rally. The surprising job growth reported two weeks ago suggested the economy was rallying more quickly than expected and boosted investor optimism. But, the recent uptick in cases and hospitalizations in some states caused investors to ratchet back their expectations for how fast the economy will recover.

The Federal Reserve seems to be in line with expectations for a slow recovery. It expects to keep rates low until at least 2022 and announced plans to continue to support fixed-income markets with ongoing bond purchases. It also continues to work to launch important lending programs authorized in the CARES Act designed to support mid-sized businesses.

The S&P 500’s decline of 4.7 percent for the week was primarily driven by Thursday’s 5.9 percent decline in response to the coronavirus data mentioned above. To put the decline in perspective, the index of large U.S. companies has risen 36.6 percent since the low in March. The MSCI ACWI dropped 4.1 percent. The Bloomberg BarCap Aggregate Bond Index rose 0.7 percent as concern about growth pushed long-term interest rates lower. Bond prices move in the opposite direction to interest rates.

This week provides glimpses into the world’s two largest economies. Between when this report was written and released, China will announce industrial production and retail sales data. These numbers provide insight on how the Chinese manufacturing base is facing the virus as well as how quickly retail sales are rebounding. On Tuesday, the United States will release the same data points. Retail sales in both countries will show how fast the consumer is bouncing back and what areas may take the longest to recover.

WHAT CAUSED THAT TO HAPPEN?

Investing can be difficult. A significant part of the difficulty comes from the market’s ability to create regret in those who participate in it. The regret investing build up is often manifested in an “if only” statement. The “if only” is often followed up by an “everybody knew” or “it was obvious.” For example, last week’s market decline likely caused some investors to say something like, “If only I had reduced early last week. It was obvious the market couldn’t keep going up.”

Statements like these can make it hard on investors. If the market had dropped this much after the S&P 500 had rallied 20 percent, investors may well have said the same thing. Instead, the market kept rallying. Even with the decline last week, the S&P 500 is still up 36.6 percent from the March low. Playing the “if only” game may cause investors to miss out on strong returns as investing becomes more about minimizing the regret from repeating a perceived past mistake.

Last week’s decline was driven by concerns over an expanded number of new coronavirus cases and hospitalizations in key states. One of our key themes for understanding the markets is the race between control of the virus and the economy. States can comfortably open up activities at a faster pace if the number of new cases declines. Over the last few weeks, the United States had seen a relatively flat trend in new cases. Because testing had increased significantly, finding the same number of cases meant the virus was in a slow retreat and gave the economy room to expand.

Last week’s case data pressured that narrative. Whether from opening up, increased community activity, or local outbreaks, a number of states are experiencing an uptrend in new cases. If this trend doesn’t slow, the pace of reopening will slow and the risk of reapplying some of the lockdown rules increases. Markets had begun to anticipate a faster recovery and the data undermined this case. Until a vaccine or therapeutic is available, virus control remains the key tool allowing economic activity to expand safely.

The following aspects of the current investing environment suggest we will continue to experience bouts of volatility:

Expect the volatility to remain and work with your advisor to minimize regret. The gradual building of regret is one of the factors we have seen throw investors off course. The regret may build up inside you and then gush out in the form of big portfolio changes. Instead, keep focused on how markets are helping you meet your goals over the long run. A better approach is to talk it out along the way with your advisor, make small adjustments, and give yourself some grace. 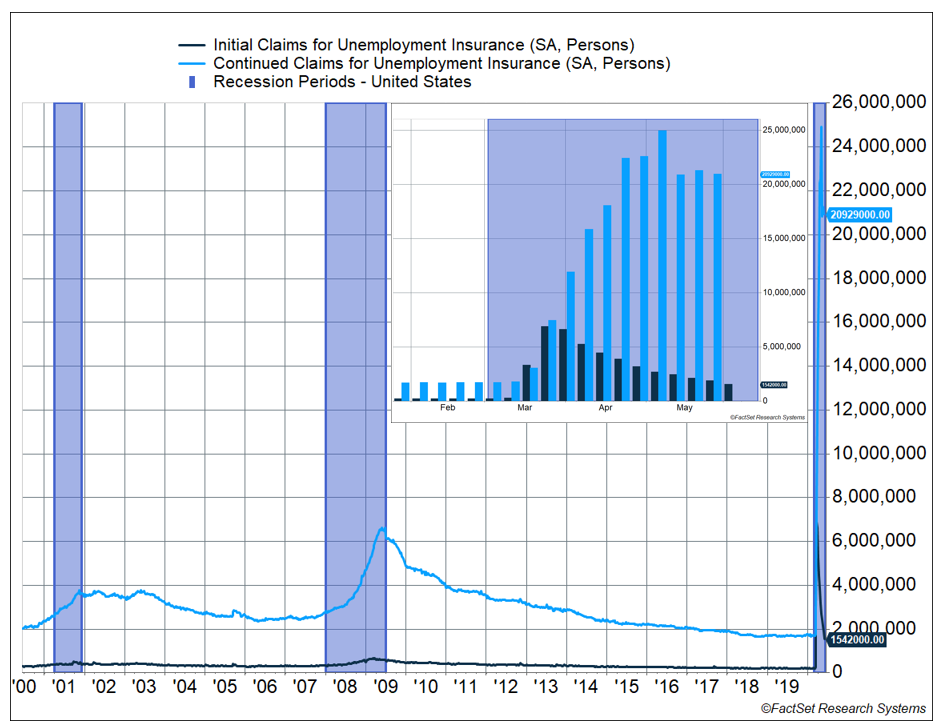