The S&P 500 wrapped up its best quarter since 1998, gaining 20.5 percent, amid a strong employment report and continued concerns as the United States and the world posted a record number of coronavirus cases. New daily virus cases topped 50,000 in the United States and more than 200,000 globally twice last week. More states slowed or rolled back measures to loosen the economy and emphasized the need for discipline in containing the virus.

The economic benefits of loosening restrictions are easy to spot, and the tradeoff between jobs and cases continues to challenge leaders. The United States reported 4.8 million jobs were regained in June (see Figure 1 below). Expectations were for 3.0 million jobs. The largest-ever gain was supported by the reopening of restaurants and bars in many states and workers being brought back as part of the Paycheck Protection Program. June’s phenomenal growth is being viewed more soberly as some states are rolling back loosening measures and there are still 15 million fewer workers than in February.

The S&P 500 added 4.1 percent last week despite the surge of new cases. The MSCI ACWI jumped 3.3 percent as the rally in the United States was felt overseas. The Bloomberg BarCap Aggregate Bond Index inched up 0.1 percent. The S&P 500 rose 2.0 percent in June as part of the strong rally last quarter.

Coronavirus case counts in the United States and globally will likely rise to the fore of key data releases this week. Weekly initial unemployment claims will be watched closely to see how slowing or rolling back plans to reopen is affecting jobs numbers. Earnings season starts in the coming weeks and will provide additional insight into how corporations are weathering the COVID-19 challenge. 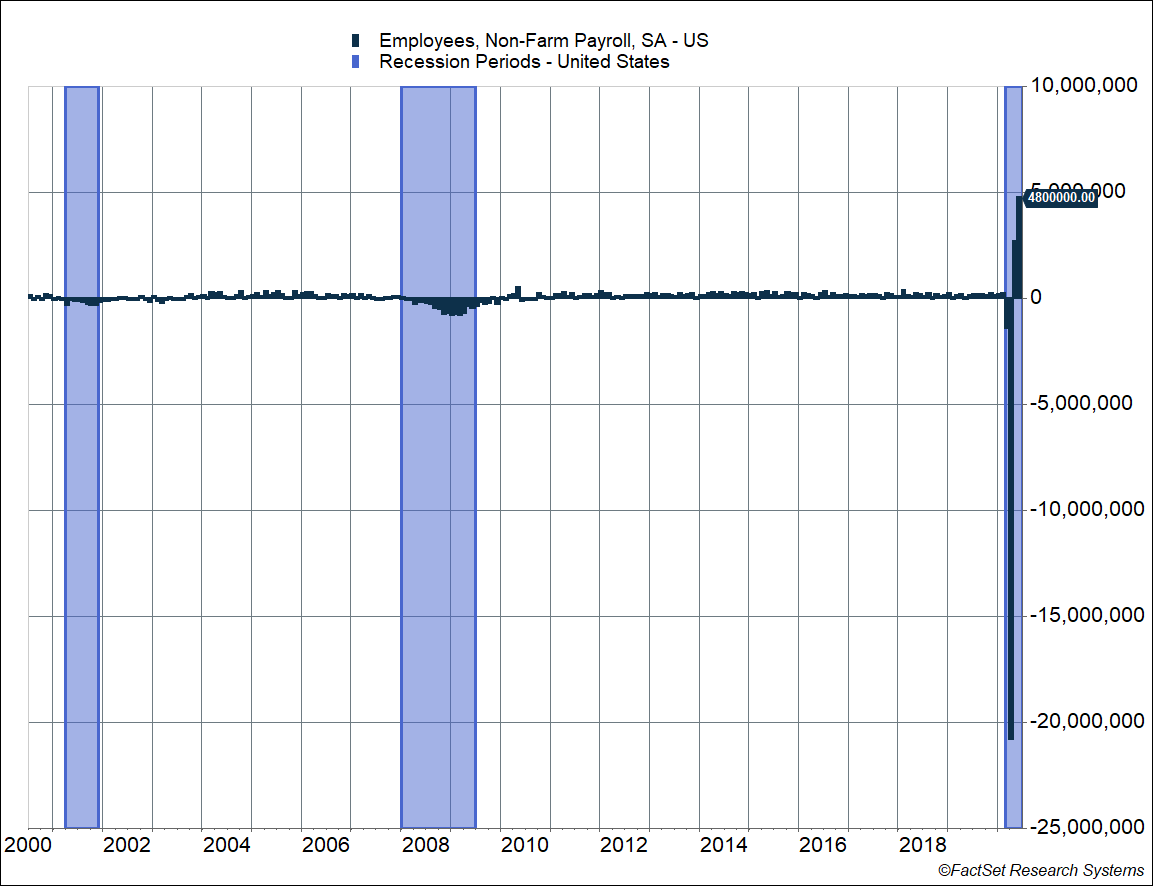 THE SURGE: JOBS, GAINS, AND CASES

The last two jobs reports have been more explosive than a Fourth of July fireworks show. The show began in May, when the economy brought back 2.7 million jobs. It accelerated in June. The U.S. economy regained 4.8 million new jobs, according to the June employment report. The gains surpassed expectations of 3 million. As Figure 1 above shows, the swings in employment are magnitudes greater than anything seen in recent history. It used to be jobs exceeding or missing estimates by 100,000 was a massive gain or loss.

It is a misnomer to say the economy created a combined 7.5 million jobs in the last two months. Many of the jobs “lost”’ during the decline were expected to be temporary layoffs as social distancing rules made it impossible for businesses to be open. As those rules have relaxed, jobs that had been “displaced” were regained. Even with the gains, there are still 15 million fewer employed workers than in February.

The hiring trends in June largely reflected the same trends in the May report. A net 2.1 million workers returned to the leisure and hospitality industry, which includes restaurants, bars, and hotels. Healthcare services brought back 568,000 jobs as dental offices and other healthcare offices returned to work. Retail regained 740,000 jobs.

Stocks rallied in anticipation of the recovery. The S&P 500 soared 20.5 percent in the second quarter. The rally was broadly based. Small stocks performed well, evidenced by a 25.4 percent increase in the Russell 2000. Nine of 11 sectors increased by more than 13 percent. The S&P 500 is up 40.7 percent from the lows on March 23.

The timing of the big rally in the stock market and the surge in job gains reflects how the stock market looks forward. Stocks rallied because investors anticipated the pain many were experiencing would prove to be temporary. The steps taken by governments, companies, and individuals were expected to produce a better jobs environment, and they did.

This truth carries with it other important conclusions. Just because jobs are returning doesn’t mean now is the time to jump into the market. Future performance is being shaped by expectations for the recovery continuing.

The strength of a future recovery is based on our collective ability to limit the damage containing the virus causes, both to health and the economy, and defeating it in the future. Limiting the damage seems more challenging than it did a few weeks ago. The increase in COVID-19 cases has slowed or reversed the reopening of the economy in much of the country. Some of the people who were rehired in the June employment report will be out of work again. Initial unemployment claims remain close to 1.5 million each week and indicate many are struggling to maintain positions.

Based on this evidence, we expect June to be the last month of explosive gains in new hires. Future improvements seem poised to be slower as some jobs that were recovered will be misplaced or lost. The surge in cases will also affect consumer behavior as the risks of certain behaviors are more present. Until a major medical breakthrough is achieved, the economy will likely recover slowly. June’s jobs report was a great finale to the first stage of the recovery. Expect future gains to be harder to achieve.

Worried about your future? Let us help plan for you.