Evidence for a sharp, although possibly brief, economic recovery continues to mount. As shown in Figure 1, retail sales rebounded another 7.5 percent in June and are now 1.1 percent higher than a year ago. Signs of economic reopening showed up throughout the data released last week. Internet retailers saw a slight decline in sales from the previous month as shoppers welcomed the chance to return to stores. 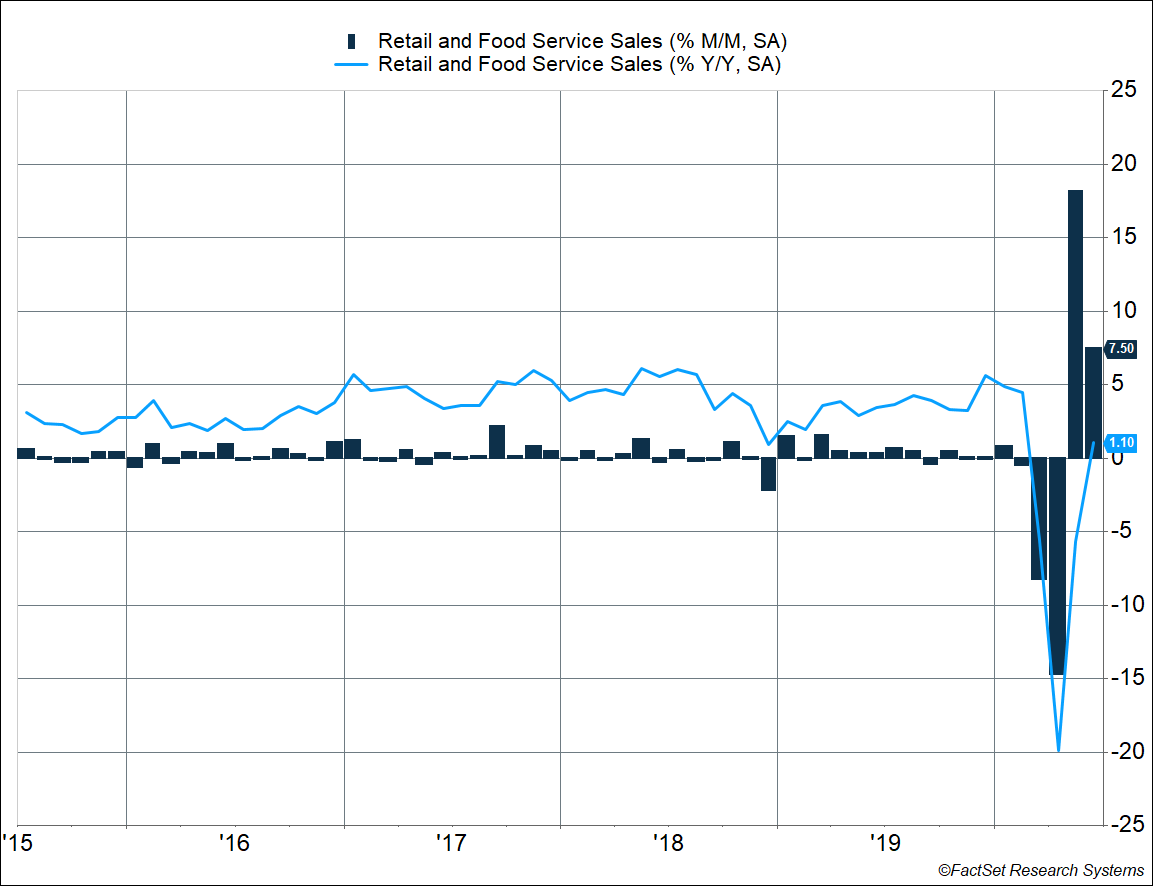 Other data suggest the rally will start to slow down. Consumer sentiment dropped last month, and the number of bankruptcy filings rose, while initial jobless claims remained above 1 million for the 17th consecutive week. These are all signs warning the surge in coronavirus cases will soon restrain the economic recovery.

Stocks shook off the bad news, and industrial stocks rallied on a 5.4 percent increase in industrial production. The S&P 500 added 1.3 percent last week and is now up 0.9 percent this year. The global MSCI ACWI added 1.2 percent to recent gains. The Bloomberg BarCap Aggregate Bond Index inched up 0.2 percent.

Earnings news will likely shape the stock market this week. Several technology firms are due to report. While many industries have struggled during the COVID-19 period, technology firms have been beneficiaries. Earnings releases will provide visibility on how well additional customers are translating into profits.

STEPPING UP TO THE PLATE

Major League Baseball players will finally step up to the plate in an official game this week. Like everything in this strange season, it will be different. Fans will not be in attendance. Coaches and catchers will both wear masks. Pitchers will just pitch, and the designated hitter will be used in both leagues.

The idea of stepping up to the plate is important for our current investment environment, too. Whether individuals, political leaders, or pharmaceutical companies, each group has an important role to play in the fight against COVID-19 and the economic recovery.

U.S. consumers are doing their part to put the economy back on track. As shown in Figure 1 above, retail and food services sales rose 7.5 percent on top of an upwardly revised 18.2 percent growth in May. Based on the rally, sales are up 1.1 percent over June 2019 after having dipped into negative territory. Normal growth has been 4-6 percent, so the number isn’t back to its typical level. But, it is positive.

Clothing, furniture, and sporting goods retailers, as well as restaurants, all benefited from the strong numbers. Restaurant and bar spending rose 20 percent but remains 26 percent below year-ago levels. The return to spending has been important to the economy. In coming weeks, consumers will need to continue to spend and take precautions against the virus so the stores that reopened can remain open.

The surge in cases seems to be undermining confidence behind the strong retail sales. The Michigan Consumer Confidence survey missed expectations by 6 points. It was the widest miss in at least 30 years. The index often follows the stock market. For confidence to drop during a period when the markets have been strong signifies an increased level of concern for consumers.

Consumer confidence can have a big effect. The increased number of cases will delay the opening of some businesses and the return to profitability for others. Evidence is mounting the delay will be hard on workers and owners. The most recent unemployment data showed the number of workers who view their unemployment as permanent has doubled in recent months. Three large U.S. banks set aside more than $27 billion for reserves against loans not repaid. That number will only increase as other banks warn of additional risks.

Globally, politicians also have an opportunity to step up at this crucial time. The weakness in employment and risks of bankruptcies indicate additional government support is needed to get the global economy back to healthy growth. Leaders must also help to manage the fight against the virus. In the United States, Congress will return to negotiate additional support for workers and business owners to buy time for the number of new cases to drop. A delay in additional support may put pressure on the economy during a vulnerable time.

European politicians also have an opportunity to support growth. Germany and France are pushing the European Union to take on debt to support its member nations. The weaker economies in Southern Europe need help from the more economically competitive countries in Northern Europe. Europe’s new cases have been in steady retreat, so the increased activity carries with it less risk than in other areas.

The scientists working on a vaccine may be of greater importance than either consumers or political leaders. Several companies are reaching key milestones in their efforts to find a vaccine.

The power of successful medical research to alter the playing field is underappreciated by some investors. In past weekly updates, we’ve discussed the risk the vaccine isn’t as effective as people expect. Another possibility is a vaccine proves more effective than people expect or arrives sooner. If that happens, markets could pivot quickly to rally-mode risk before any investor has a chance to pull money in from the sidelines.

A little like a baseball team, the world needs people to step up the plate and do their absolute best. Unfortunately, the pitches the team is forced to swing at are difficult to hit, and not every swing will get a hit. When the players are doing their part, the virus eventually becomes less dangerous and the economy can continue to bounce back.

Ready to take a swing?