Stocks continued to climb in the face of an increasing number of new COVID-19 cases and evidence the surge is stifling the economy’s ability to recover. Initial unemployment claims dipped to 1.3 million, but they have remained above 1 million for 16 consecutive weeks. Because new claims are offsetting other jobs being regained, there are still 34.8 million people collecting or waiting to collect unemployment benefits through regular programs or special programs targeting the self-employed.

As earnings season kicks off in earnest this week, investors should be prepared to curb their enthusiasm. Second quarter earnings are expected to slump 44.8 percent compared to a year ago. If they fall nearly that much, it will be the worst decline since 2008. Investors appear to be looking past this quarter and are anticipating improvement in coming quarters. As figure 1 below shows, the market gains and earnings decline has raised the price-to-earnings ratio above 22 for the first time since the technology bubble. 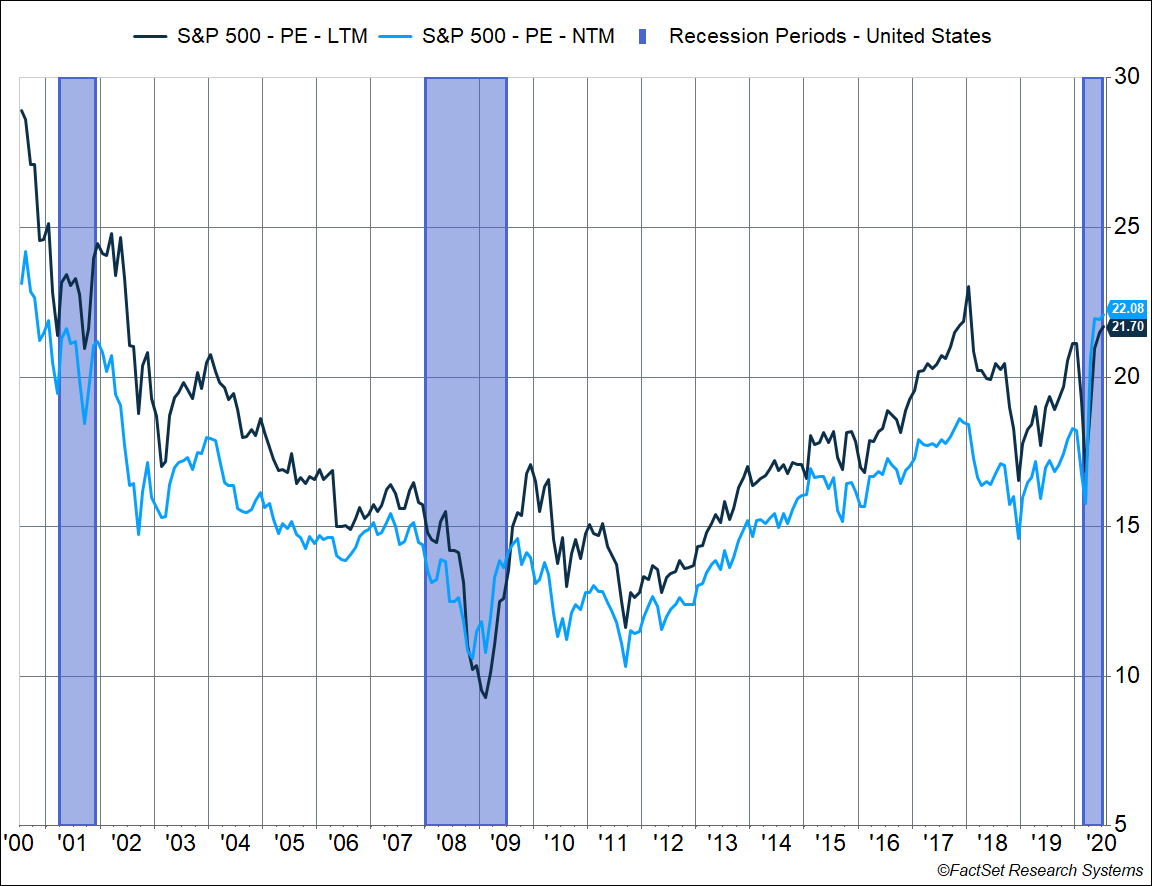 Markets seemed to focus on good news as an existing treatment for COVID-19 appears to be lowering the risk of death in severe cases. The S&P 500 added 1.8 percent last week. The global MSCI ACWI jumped 1.8 percent as well. The Bloomberg BarCap Aggregate Bond Index added 0.4 percent. The S&P 500’s rally comes on the heels of a very strong second quarter. The index of large U.S. stocks is already 2.8 percent higher this quarter.

The most interesting economic reports this week will come from China. The Chinese will announce retail sales and fixed asset investment numbers. China is the world’s second largest consumer market, and data from countries with relatively few new coronavirus cases provide insight into how quickly the U.S. consumer might respond when case counts drop.

URGENT, BUT NOT AS IMPORTANT

Steven Covey, in his book, “The 7 Habits of Highly Effective People,” described four quadrants in which to classify tasks based on a 2x2 grid rating the task’s urgency and importance. Quadrant three is the label for tasks that are highly urgent but not particularly important. Spending lots of time on those tasks is viewed as the ultimate drain on productivity.

In the same vein, the upcoming earnings season, election, and GDP report don’t carry the same weight as other events as far as their potential impact on markets. Earnings this quarter are expected to be terrible. Current estimates are for a decline of nearly 45 percent. Even with the standard tendency for companies to beat expectations, S&P 500 earnings are still likely to decline around 40 percent. The last time S&P 500 earnings fell that much was during the 2008 financial crisis.

Investors seem to be looking past this report with what we dub “rose-colored binoculars.” Figure 1 above shows how optimism regarding an economic recovery and its impact on future earnings has boosted forward price-to-earnings ratios to above 22. Valuations haven’t reached these levels since the technology bubble near the turn of the century.

Rather than seeing this as an indication the market is radically overvalued, it would be fairer to say the market is looking past this quarter and into a more distant future, thus rose-colored binoculars. Based on various data, our view is market expectations are centered on continued improvement in the U.S. economy and meaningful progress in containing the virus by at least early next year.

The upcoming election, from the standpoint of markets, is also likely to be less important. Former Vice President Joe Biden comes from the middle of the Democratic Party and doesn’t represent the sharp change we may have seen if Senator Bernie Sanders or Senator Elizabeth Warren had earned the nomination. President Donald Trump’s more restrictive stances on immigration and trade make him a little less business-friendly than other Republicans. But, it seems likely most of the corporate tax cuts and efforts to deregulate business will continue regardless of who is elected. On other issues, this election may be extremely crucial. At least from the standpoint of the market, it appears to be less important than normal.

The last “less important than normal” event will be the second quarter GDP report released on July 30. The actual GDP number will likely be shocking for its size, but the focus is much more on the pace of recovery than the depth of the fall that was most concentrated in April and early May. Current estimates are for a decline of 35 percent. Remember, this number measures how much the economy would decline if it contracted at the current pace for four consecutive quarters. If the decline is that large, it means the actual level of economic activity contracted more than 8.5 percent in the second quarter.

Don’t expect media outlets to agree that any of these events are less important than normal. Even financial news anchors make fun of their tendency to call the next economic release “all-important.” Cable news networks benefit from elevating the importance of the election because it drives viewers. These releases are still important, and we will keep you informed of the key elements. They just won’t be as important as the next round are likely to be.

What is important to you?