Stock markets rallied sharply last week as uncertainty continued to fade. U.S. trade negotiators were able to secure approval of the USMCA (United States-Mexico-Canada Agreement) trade deal in the House of Representatives. While steps remain for its final approval, all indicators are the deal will be ratified in early 2020.

One item slowing down USMCA approval is the likely impeachment trial in the Senate. The House voted to impeach President Donald Trump along party lines, and a trial in the Senate may take precedence over the trade deal. Given the strong support from Republicans in the House, the two-thirds vote needed in the Senate to remove the president seems out of reach. The issues raised will live on in the presidential campaign, and the Iowa caucuses are less than 45 days away.

Personal income in the United States has risen 4.9 percent over the last year, and it climbed a healthy 0.5 percent last month. Spending increased 3.9 percent over the last year and a steady 0.4 percent last month. The data supports the conclusion of a workforce that is earning more and holding back some of the additional earnings to increase savings.

The combination of good economic news and a trade deal coming to fruition pushed stock markets higher. The S&P 500 soared 1.7 percent last week and reached another new record high. The global MSCI ACWI gained 1.4 percent as global stocks benefited from the news above as well as improved economic data from China. The good news was more than bonds could handle. Optimism for improved growth moved interest rates higher. Because interest rates move in the opposite direction of prices, the Bloomberg BarCap Aggregate Bond Index dropped 0.3 percent.

and the three-, five-, and 10-year returns are annualized; and the 10-year Treasury Note is simply the yield at the close of the day on each of

Change of the Decade?

The 2010s are coming to an end – a fitting time to reflect on the many important changes that have occurred in the last 10 years. The incredible increase in U.S. energy production ranks near the top of the list. As the accompanying chart shows, the U.S. trade balance on energy goods started deteriorating sharply toward the end of the century and continued to get worse until the 2008-2009 financial crisis. Even after the declining demand for energy at that time, the balance remained wide and seemed to settle between a deficit of $25 and $30 billion. 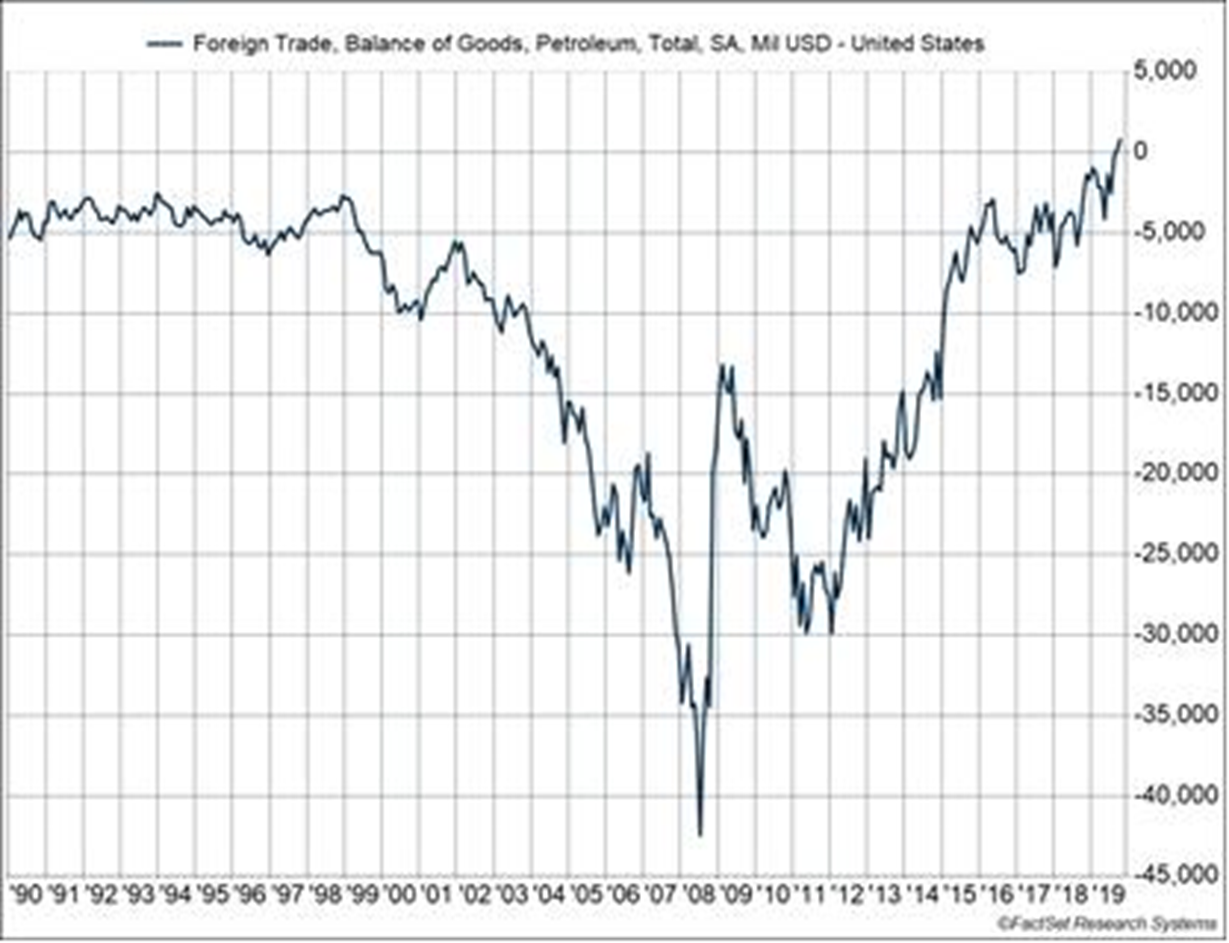 The shale revolution changed the tide. Energy production in the United States increased rapidly as the controversial techniques used to extract oil from previously uneconomic fields caused oil production to soar. In addition to increasing the amount of oil produced, the wells produce substantial natural gas, making them an even more viable source of energy.

The surge in energy production has changed the world in multiple ways. Three key factors are explored below:

Ever since the early 1970s, conflict in the Middle East has impacted the U.S. economy. Two oil shocks in the 1970s contributed to economic decline and higher inflation. As the United States has become less reliant on imported oil, the importance of the region has diminished. Concerns about terrorism remain the central concern, but the emphasis on oil has subsided.

In order to make sure oil flowed safely from the Middle East to the United States, the U.S. Navy safeguarded passage for ships across the world. This ensured the United States received its oil, but it also meant other countries could benefit from a surge of trade across the globe. As the United States has become less reliant on foreign energy trades, it has reexamined its relationship to trade. The result is a policy shift toward increasing the United States’ benefit from trade rather than keeping the trade lanes safe so the oil could continue to flow.

The rapid scale-up in the production of shale oil is one of the major changes reshaping our economy. It has made the United States an energy exporter: Given the massive trade deficit in energy the United States had just before the financial crisis, few would have predicted the massive shift. In a decade dominated by technology, this change in the energy markets may be just as impactful.

All I Want for Christmas is some Airplay

Breaking into the Christmas song canon is tough. The definitive version of “White Christmas” is the Bing Crosby hit recorded in 1942. So, when Mariah Carey produced a new Christmas song in 1994, “All I Want for Christmas is You,” the odds of it breaking into the rotation weren’t good. Instead, the song has become a runaway success. Twenty-five years after its release, it just hit No. 1 on Billboard’s “Hot 100” list and is about to get its own Amazon documentary.