U.S. GDP fell 32.9 percent last quarter on an annualized basis. It wasn’t as bad as it looks. Annualizing the data magnifies the decline by assuming the trend will continue for a full year. A better assessment can be gained by comparing GDP to the same quarter last year. Using this measure, the U.S. economy shrank 9.5 percent. Even the lower number is staggering. During the global financial crisis, the economy slowed just 4 percent based on a similar measure (see Figure 1). 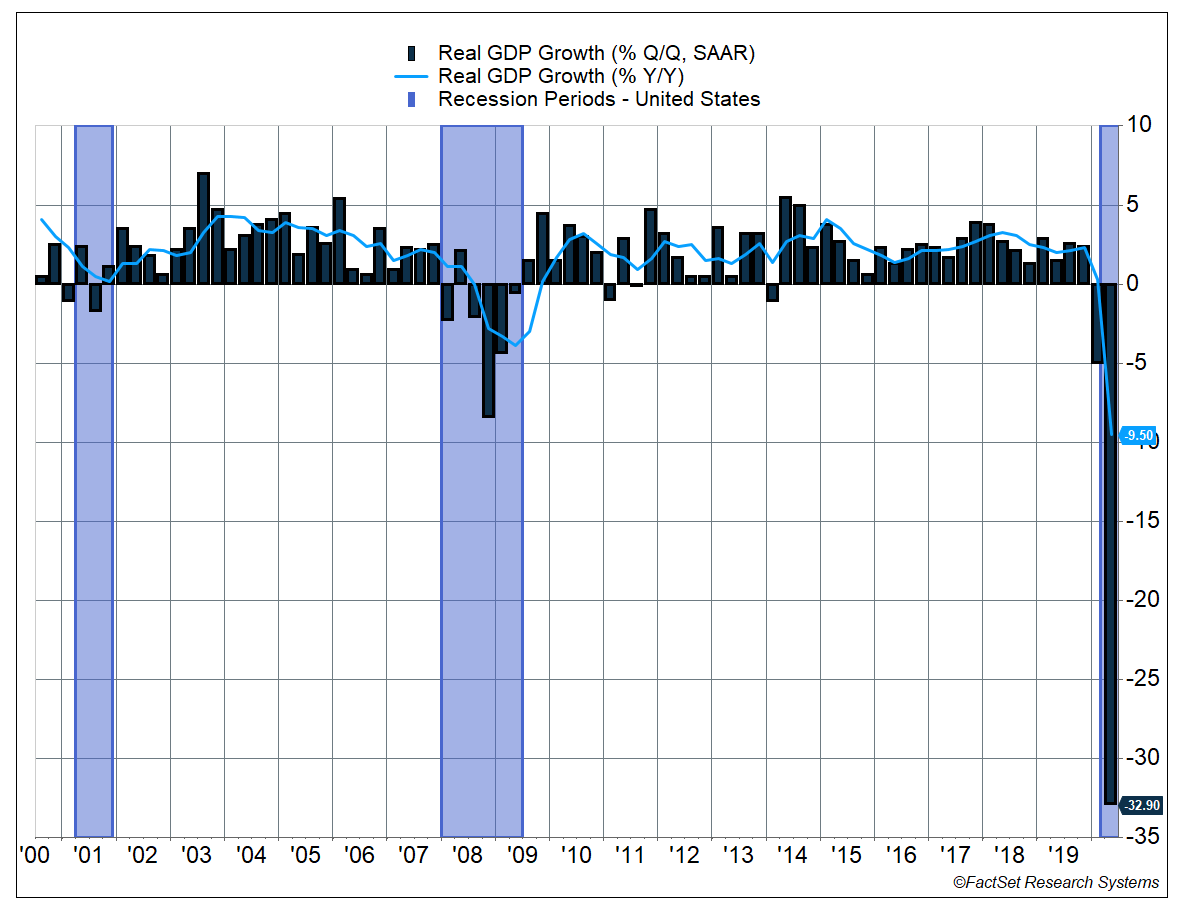 Much of the damage to second quarter GDP was done early in the quarter. Income and consumption data for June showed activity is rebounding but remains well below pre-crisis levels. Personal consumption expenditures rose 5.6 percent in June.

The Federal Reserve met last week and left its policies unchanged while emphasizing Congress must act to control the virus and pass fiscal policy, which will matter more than monetary policy in coming months.

The U.S. employment report will likely be the most watched economic event this week. Estimates are for 1.4 million jobs added in July. That is only 30 percent of the number added in June, and the high rate of initial unemployment claims makes the data even more uncertain.

The 32.9 percent decline in U.S. GDP marked the largest slide since the government began to measure quarterly GDP in 1947. As mentioned above and shown in Figure 1, annualized GDP data magnifies the decline by projecting economic trends to continue for a full year.

Economists’ expectations are the opposite. GDP is expected to bounce back 18 percent in the third quarter. One way to better measure the effect of the pandemic is to compare GDP to where it was one year prior. Based on this measure, GDP is 9.5 percent lower.

This measure understates the damage by ignoring the fact the economy would have likely grown without the pandemic and ensuing recession. Figure 2 below seeks to overcome this challenge by measuring GDP relative to the recent economic growth trend. The economy is now 11 percent below its 2009-2019 growth trend. 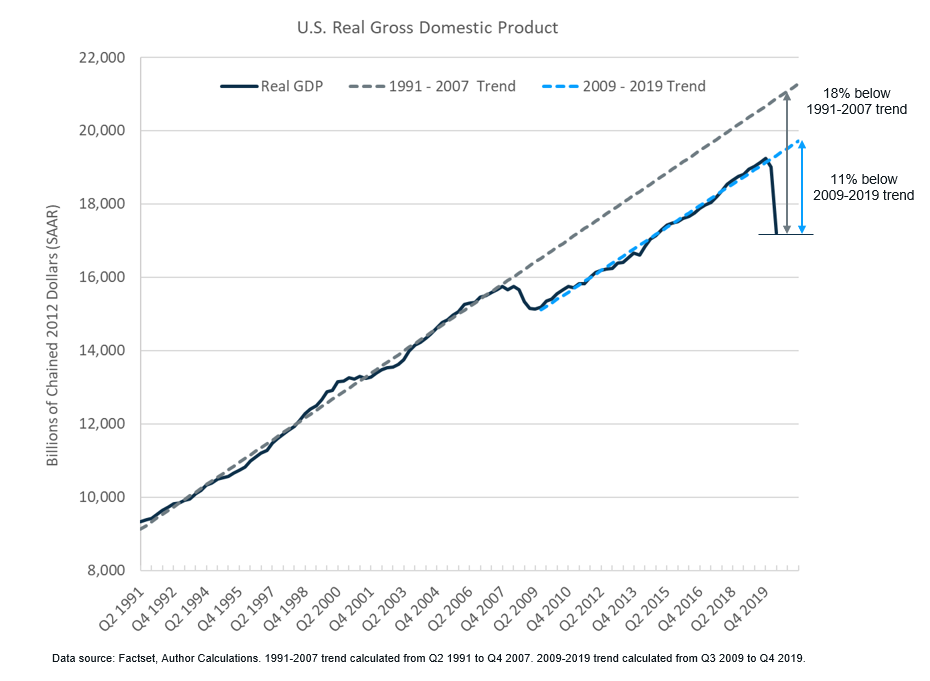 Another important question is how quickly and how far the economy will bounce back. The expected rebound next quarter would make up around one-third of the gap between current GDP and the recent trend. If the economy continues to bounce back and the virus is better controlled, the fourth quarter and future quarters should create a faster growth rate than the previous trend, making up for lost ground. Without better virus control through social distancing, our expectation is growth will be tepid until a vaccine is developed.

Figure 2 also underscores the power of the 2008-2009 recession. The financial crisis was very damaging economically because after the recession ended, the post-crisis growth rate decelerated rather than accelerated. The lack of accelerating growth means the economy never made up the lost ground. The longer the pandemic lasts, the more permanent we expect the economic damage to be.

The GDP report showed pockets of strength and extreme weakness. Services dropped 43.5 percent and were much weaker than goods, which declined 11.3 percent. Health care, transportation, restaurants, hotels, and recreation all fell between 60 percent and 95 percent. The data also showed signs of how the post-COVID world has increased demands for certain goods. Recreational vehicles (RVs) and related goods rose 40.5 percent and auto production surged 5.5 percent. Public transportation and carpooling to school seem less attractive options in a new era, raising the demand for automobiles.

The eurozone reported an even larger decline than the United States. Second quarter GDP was 15 percent lower than one year ago. This masks other data suggesting its economy may be poised to rebound more quickly than in the United States. Europe’s efforts to control the virus have been more successful, and unemployment has increased far less in Europe as aid packages were more successful at keeping workers in their jobs.

As jobs data comes out next week, we are reminded the challenges to the economy will become easier to manage when the virus is better controlled. Fed Chairman Jerome Powell noted in his press conference, “I think we feel that it might be the most central factor or the most central driver of the path of the economy is the virus.” Further declines in the number of new U.S. cases may influence markets as much as the job numbers next week and in weeks to come.