The measures slowing the spread of the coronavirus are dealing severe challenges to the U.S. job market. Social distancing has proven difficult for day cares, dentists, restaurants, and retail. As the accompanying chart shows, 6.6 million workers filled for new unemployment benefits last week. This doubled the previous week’s record of 3.3 million workers. 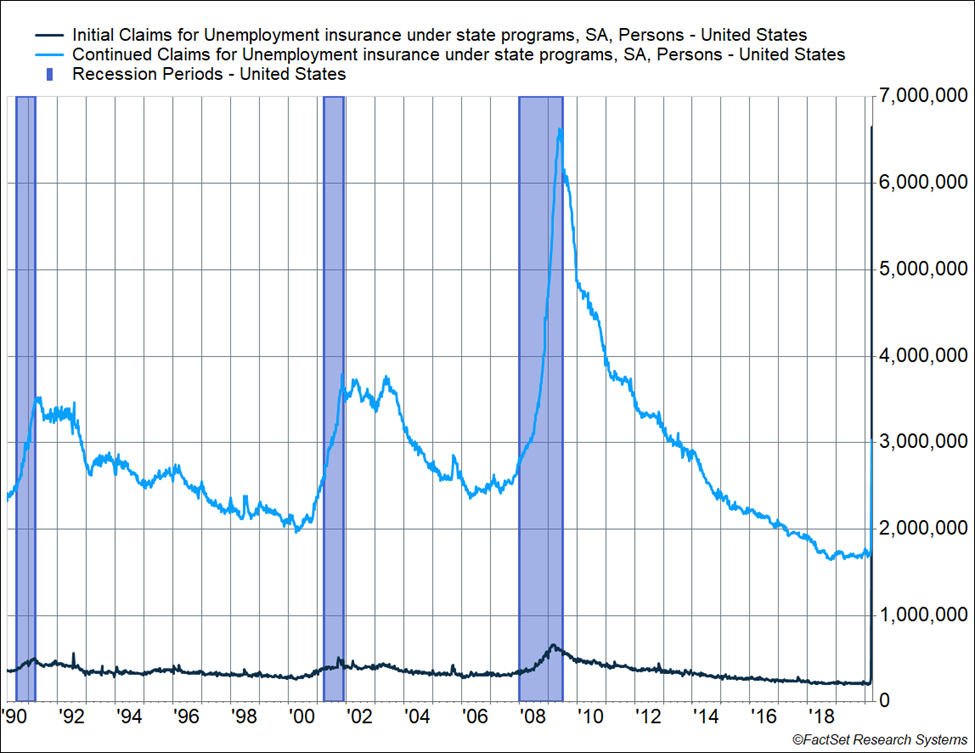 On Friday, banks began taking applications for forgivable small business loans designed to keep workers on the payroll and the lights turned on. More than 17,000 loans have been approved, totaling more than $5.4 billion. The efforts will help, but the number of layoffs from large employers and stronger social distancing standards in states make keeping people employed very challenging.

The challenging economic news caused markets to give up some of the previous week’s gains. The S&P 500 fell 2 percent in volatile trading. The index moved by more than 1 percent every day last week and has moved by more than 1 percent in either direction 28 of the last 31 trading sessions. Global stocks dropped as the MSCI ACWI dipped 2.5 percent. The Bloomberg BarCap Aggregate Bond Index gained 0.7 percent as efforts to improve bond market liquidity and continued economic weakness supported bond markets.

We should expect the job market to remain challenging and for the economy to recover slowly. China and Korea, the first two countries to face the virus, have made significant progress in containing its spread. In order to prevent a resurgence of the virus, both countries have only slowly reduced social distancing rules.

EMPLOYMENT NOW AND IN THE NEAR FUTURE

As investors, we should prepare for economic data to be rough in the short term. The powerful measures keeping us away from each other are also keeping us from spending money on many items as health is rightly being prioritized over economic output. The decrease in spending is pressuring sales and forcing businesses to lay off or furlough workers. Last week’s employment data confirmed the declines in the U.S. job market will be severe.

Some help is becoming available. For small businesses, the Paycheck Protection Program kicked off on Friday. The program lends to businesses with fewer than 500 employees. Some or all of the loan can be forgiven if the employer retains employees. Applications were robust even though multiple banks and borrowers reported difficulty in filing for loans. The CARES Act sets aside $350 billion for such loans.

These loans will help stem the job losses for some. The question is, how many? Based on the number of layoffs announced last week and the number of initial unemployment claims, many businesses and nonprofits are reducing payroll now rather than later.

The jobs data are important because if employees remain on the payroll, a business can bounce back quicker as social distancing requirements are relaxed in the future. The American Enterprise Institute published a paper by former FDA commissioner Scott Gottlieb outlining the steps for social distancing requirements to be relaxed. Their conclusion is areas would first need to see sustained declines in new cases and an increased ability to track new cases. Given the continued growth in new cases in the United States and the extension of government guidelines, jobs data will likely be challenged for a while.

One area we are watching closely is how the Chinese and Koreans are reopening businesses after they have reduced the number of new cases. Both countries remain worried about a renewed outbreak. Korea’s number of daily new cases has been near or below 100 for 24 consecutive days. Yet, the country is still curtailing meetings. China’s situation is mixed. Economic data shows activity rebounded slightly last month after contracting in February. Some steps towards reopening have been pulled back. China had allowed a handful of its movie theaters to reopen but closed them again on Friday.

The progress in China and Korea shows the recovery can start relatively soon after the virus is controlled, but progress will be slow in the early stages as concern of a renewed outbreak will make public officials very cautious. Markets, which acknowledge the present and look to the future, will need to take a long-term perspective as the recovery may not be as immediate as initially hoped.