Leaders around the world announced steps to open up their economies by gradually reducing social distancing as the global economy continued to struggle. In the United States, more than four million people filed initial claims for unemployment. Energy demand is so low that the price of one oil contract turned negative in response to the lack of storage available. Durable goods orders in the United States dropped 14.4 percent as airlines cancelled orders for aircraft. 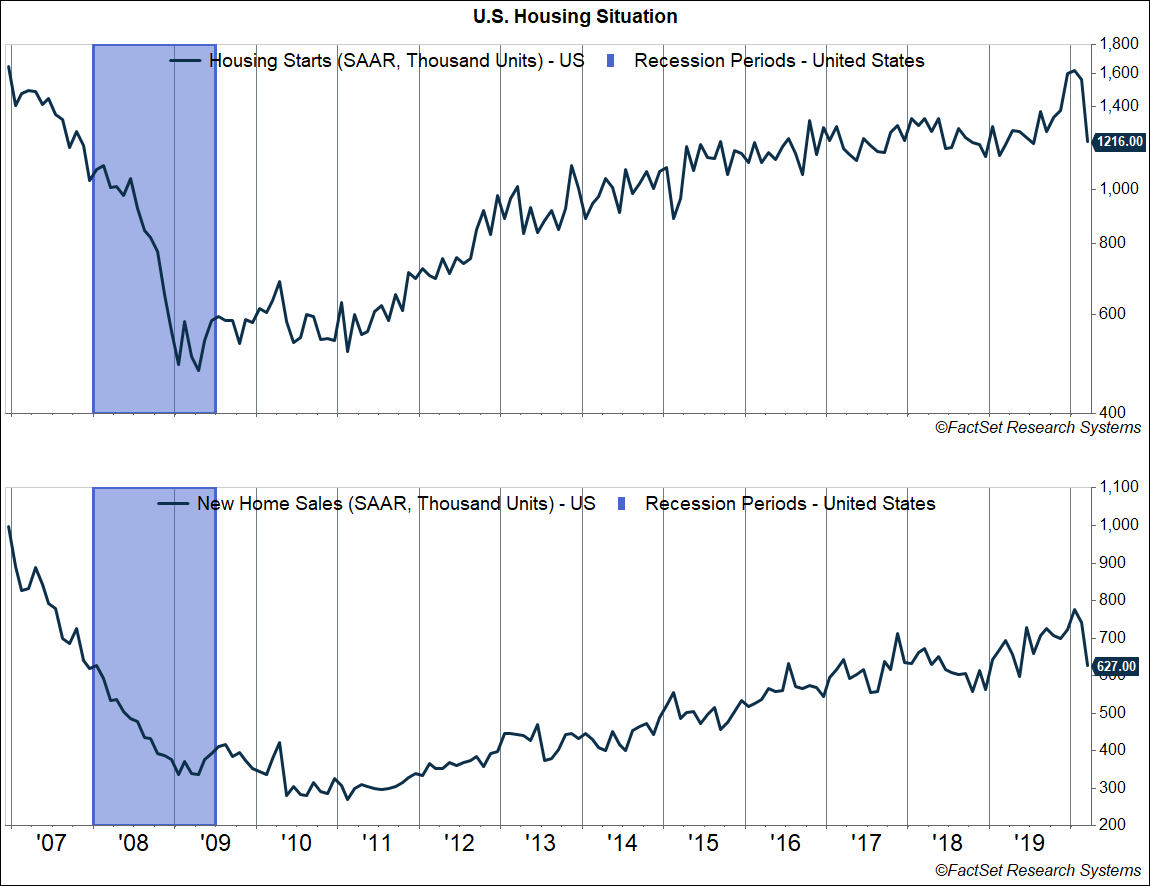 Consumers remain fairly optimistic in spite of the bad economic news. The University of Michigan Consumer Sentiment Index showed consumers’ attitudes toward current conditions dropped more than 29 points, while the expectations index eased fewer than 10 points. As the accompanying chart above shows, housing data dropped, but not precipitously. The government approved an additional $484 billion of coronavirus relief, including $310 billion to fund the popular Payroll Protection Program, which had lent out its initial allocation.

This week is full of key data releases. A number of large U.S. companies will report earnings. Most of the large technology companies are in that group, and the reports and earnings calls will provide further insight into how social distancing is affecting earnings. The Federal Reserve and the European Central Bank both meet, and initial estimates for U.S. first quarter GDP will be released.

The transition from focusing on social distancing to taking steps to reopen the economy represents a major change in the ongoing battle against the coronavirus and the economic damage being done by the steps taken to reduce its spread.

Additional foreign leaders and U.S. governors announced steps to allow more commerce by gradually reducing social distancing. Some made defined changes in policy, while others reaffirmed current policy but relaxed some of the more stringent requirements. Either way, the trend is toward encouraging businesses to expand activity.

The moves to reopen the economy change the metrics used to evaluate progress in the fight against COVID-19 and the resulting economic fallout. As the arrow graphic shows, we see this process unfolding in three key stages, the timelines of which depend on whether each area shows reduction or resurgence.

The first will be to maintain progress against the virus. Reducing the number of daily new cases, which have been relatively flat in the United States over recent weeks, will be the key measure of whether progress is being sustained. A resurgence in cases threatens to slow or reverse the pace of reopening.

The incremental steps to reopen the economy will bring back some employees. The consumer response will determine how many and how soon. States can mandate businesses close and consumers stay home, but they can’t force consumers to go out and start spending. A reduction in weekly unemployment claims will be a key metric in determining if business activity is strong enough for employment to recover.

Last week, the Labor Department reported more than four million workers filed for initial unemployment benefits the previous week. Around 25 million workers have filed for initial benefits over the last five weeks. The continuing claims, which are reported with an additional week’s lag, are close to 16 million. These staggering job losses would likely have been higher if programs such as the Payroll Protection Program hadn’t provided small businesses forgivable loans to keep people employed. That program lasts for eight weeks, and whether it provides enough economic momentum to prevent a resurgence in layoffs will be a key litmus test in coming weeks.

Earnings come last, and the goal is flipped: Slow the reductions and expect a resurgence later. Earnings will be very challenging for many industries. Based on estimates from FactSet, first quarter earnings will contract 15.8 percent when compared to the same quarter last year. The second quarter is projected to be even worse. Analysts expect a decline of 31.9 percent. Earnings are expected to decline in the third and fourth quarter, too. Investors will be looking for earnings to decline at a slower rate. The poor outcomes from the first and second quarter are anticipated.

Understanding what to expect can help you work through what will likely be very challenging economic data this week. Instead of focusing on the already expected, look for indicators of reduction or resurgence in key areas happening at the right time. If other investors look at the wrong items, it may create an opportunity to take advantage of lower prices.