ROBARE AND JONES ON THE MARKETS


The S&P 500 has been fairly accurate at picking the future president in the election cycle when looking at the previous 3 months leading up to the election. The index has accurately picked the last 21 of the last 24 election cycles since inception. When the market was up, the party that was in power has remained in power 87% of the time. When the market was down, the party there was a change in administrations 90% of the time.


The S&P 500 was down 1 point which amounts to .035% down. This was the narrowest margin leading up to an election cycle, so given that this election has been a narrow margin should be no surprise. It seems as though Biden will be the winner which the S&P 500 has accurately picked again.


One thing that you can almost always count on are markets to bounce all over the place before, during, and after an election (especially future markets). We have seen that the markets like gridlock in Washington D.C. and there’s only short-term volatility if there’s a clean sweep either way. Markets this past week were the highest they've been in an election week since 1932 which shows that even when it seems like the sky is falling in an election year, the best investors stay invested.


After doing years of research, we can conclude one thing…no one knows how markets will react during election season so it’s best to be invested as any point in our history has led to all time market highs in just a short matter of time.


Here’s how the markets have done this past week!

There’s always been an old saying “as Ohio goes, the nation goes” but it appears that may have changed from this election. Before 2020, Ohio had picked the presidential winner 32 out of the last 36 (88.8%) election cycles and New Mexico had picked the winner in the last 24 out of 27 (88.8%) election cycles (New Mexico joining the U.S.A. in 1912). So for the next election cycle, be keen on the voting of Ohio and New Mexico for historically being the most accurate when it comes to selecting the next president in 2024.


Now with this year just about in the books, the saying might have to change to New Mexico. We now have a state that is the new front runner for most accurate election picks with New Mexico surpassing Ohio at 89% to 87% respectively.


The states that were the least accurate when it comes to voting for the election winner have all stemmed from the deep south. These states are Mississippi, Alabama, and South Carolina all voting correctly only 51% of the time (19 of the last 37 election cycles). This data stems back to the civil war with not all states yet being restored to the Union.


Long story, short…there are always headlines, analysist, and polls that attempt to predict the winner of each election, but the most accurate predictors are New Mexico, Ohio, and the S&P 500. 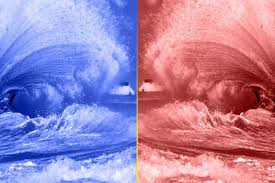 Were your election predictions correct?