The U.S. employment report missed expectations, but it reinforced our view the U.S. labor market remains strong. As shown in the accompanying chart, 145,000 new jobs were created, missing expectations of 160,000. Wages have risen 2.9 percent over the last year, falling below 3 percent for the first time since late 2018. Because inflation is low, wages are still rising at healthy levels and strengthening the finances of many workers. 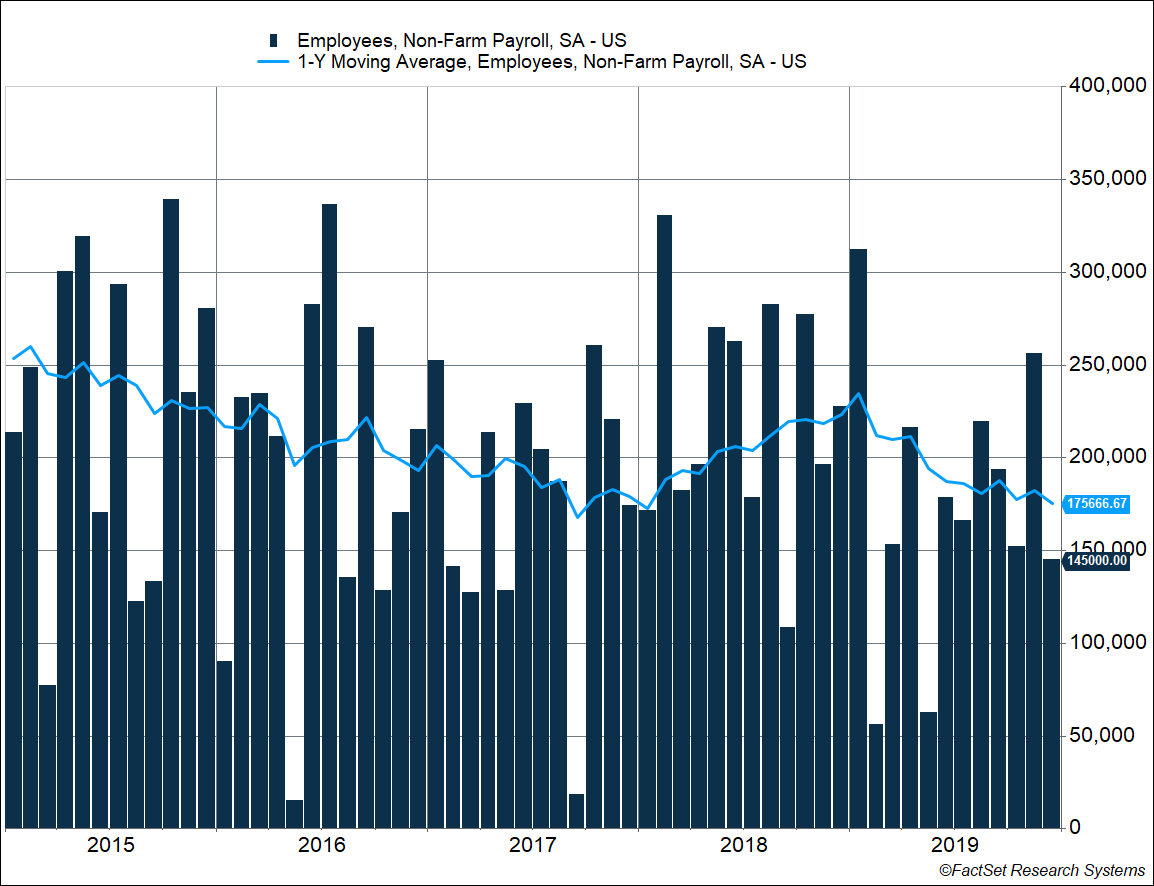 The Phase One U.S. trade deal with China is likely to be signed this week, further cementing the truce in the trade war. Last week, international markets wrestled with slowing auto production in Germany and union strikes in France protesting pension reform. Tensions with Iran ebbed as no U.S. military personnel were harmed in Iran’s reprisal and the tragic downing of a Ukrainian airliner over Tehran became a larger story.

The most interesting news this week may be any surprises in the final text of the U.S.-China Phase One trade agreement. Fourth quarter earnings announcements will also begin. In addition, industrial production and retail sales data will provide deeper insight into manufacturing and the United States and Chinese consumer.

Jobs at the Turn of the Decade

The U.S. employment report has been a source of optimism even when uncertainty or weakness indicated the overall U.S. economy was weakening. That didn’t change with the December employment report.

The final jobs report of the decade showed the United States produced an estimated 145,000 jobs in December. The number slightly missed expectations, but it was solid enough to reflect a strong U.S. jobs market. Unemployment remained at a 50-year low of 3.5 percent. Previous months were revised lower by 14,000 jobs. Even with the revisions and miss, the three-month average is an extremely strong 184,000. Wage growth increased 2.9 percent, dipping below 3 percent for the first time since late 2018.

Expanding our horizon tells an even rosier story. 2019 was a great year for the average employee. More than two million new jobs were created last year, following 2.8 million new jobs in 2018. Wage growth was very strong and well above inflation.

Perhaps more importantly, employees who earn less or are less educated showed the highest percentage gains. Employees whose earnings were in the bottom 10 percent of the workforce averaged a 5.9 percent increase in their average hourly earnings. Middle class wage earners experienced a higher percentage gain than the top 10 percent of earners. The long recovery has helped expand the number of winners.

Women now outnumber men on U.S. payrolls. Health care and education, two industries in which women hold a high percentage of positions, experienced higher job gains than many other industries. As the economy becomes more service-oriented, traditionally male jobs represent a smaller portion of the workforce and the educational advantage held by women becomes a more significant edge.

The biggest surprise in the last few years has been the number of people reentering the labor force. Many expected inflation to become a threat as unemployment declined. The opposite happened as more workers, than anyone expected, found jobs. Retirees are returning to work. Graduates are finding their first jobs, and former workers who struggled to find jobs for years are the best people available in tight labor markets.

The 2010s benefited many job hunters. Wage growth and job growth were slow in the early parts of the decade. The economic recovery’s duration has raised wages and enticed many people, who weren’t looking for work, back into the labor force. This month may have missed expectations slightly, but an economy producing a healthy number of jobs and steady wage gains is one investors and workers would likely welcome for as long as it lasts.

Can We Still Send You the Trash?

[This is the second of three stories about China as the Lunar / Chinese New Year approaches.]

In recent decades, China has been the top global consumer of copper, steel, cement, and trash. That’s right, trash. China was the destination for 70 percent of the world’s plastic waste, until recently. Because of the large trade deficit, goods carrying Chinese imports to the United States often went back empty. For a minimal cost, China was willing to carry plastic waste instead. But this changed. China couldn’t process it all and wages rose, making the business less profitable. Now the United States must figure out what to do with its own trash. The cost to recycle has risen in the United States as a profitable export has become more elusive.