A powerful jobs report in the United States produced continued evidence the U.S. economy is performing well and the risk of recession is lower. As discussed in greater depth below, the economy produced 266,000 jobs in November, and jobs numbers for the previous two months were revised higher. The risk of a recession continues to decline in the United States.

This week packs three important decisions into a very short period. On December 11, the Federal Reserve will decide whether to adjust interest rates. Given the strong jobs number, the Fed is widely expected to leave rates at current levels. The next day, Great Britain goes to the polls to pick a new Parliament that will decide whether to finally execute Brexit. Polling data has been unreliable in recent elections, so the outcome is uncertain. On December 15, the United States is set to increase tariffs on additional Chinese goods. Movement toward a U.S.-China trade deal, which has not been announced despite frequent assurances of progress, will be an important test this week. Implementation of the promised tariffs would be a negative indicator.

On the week after Black Friday, investors received news showing the U.S. job market continues to shine. The U.S. economy produced another extremely strong jobs report in November. The strength of the report reduces the odds of the United States sinking into recession in the near future. By almost any measure, the U.S. labor market remains robust.

Employers added 266,000 new jobs in November. Subtracting the 41,000 jobs from General Motors workers returning to work after a strike still puts growth above 200,000 jobs. In addition, September and October were both revised higher, pushing the average number of jobs created each month in 2019 to 180,000. Growth remains well above the approximately 100,000 jobs needed to provide positions for new workers entering the labor force. Unemployment dropped back to 3.5 percent, matching the lowest level since 1969. The number of employees who are working part-time for economic reasons, rather than by choice, also continues to decline.

As the accompanying chart shows, the growth isn’t as strong as last year, but it remains very strong for an economy that has been growing for a decade without a recession. The strong data in recent months also stayed the declining trend in the rolling one-year jobs data (brighter blue line). 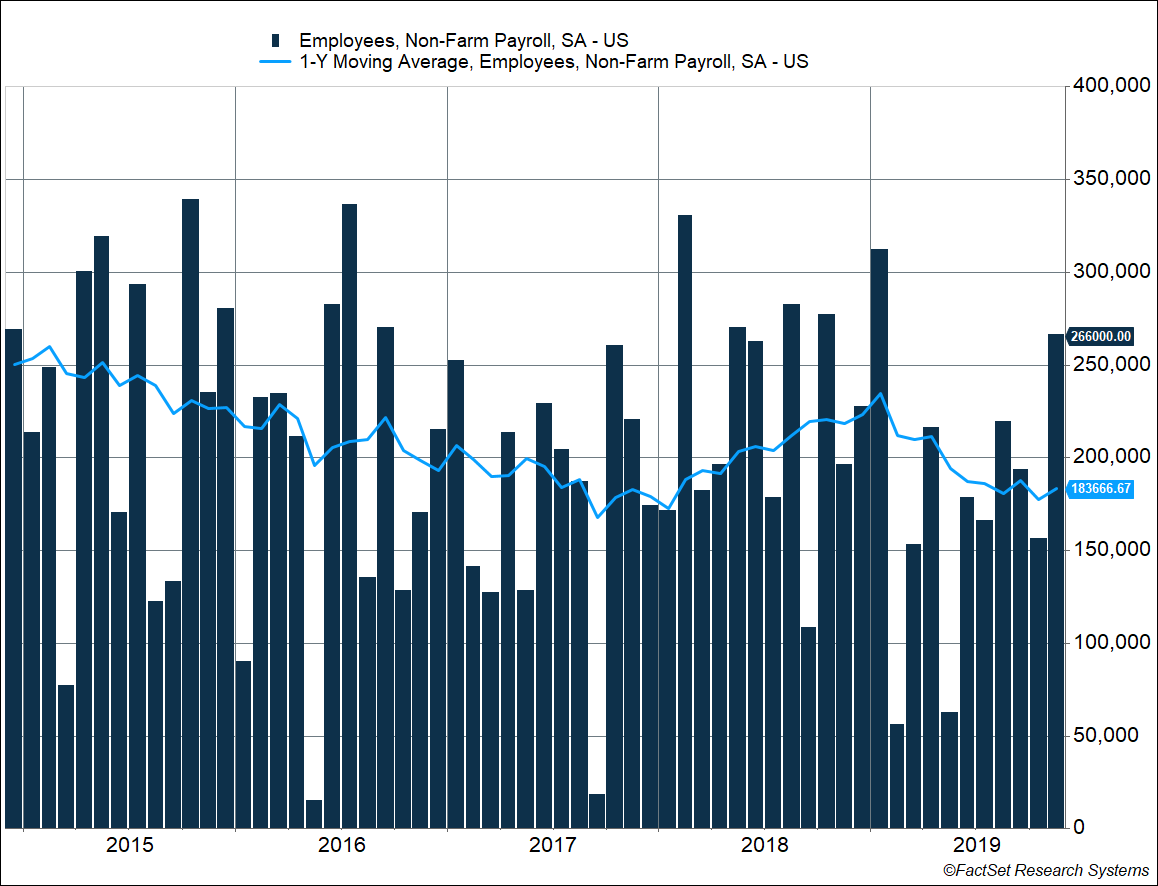 Workers continue to get raises above inflation. Wages rose 3.1 percent last month, which is well above inflation. Non-supervisory wages rose 3.7 percent as the salaries of line employees increased at a faster rate than their managers. Long-duration recoveries often benefit the average worker more as wages must rise more rapidly to retain workers and coax additional people into the labor force.

People who decide to start looking for a job after being out of the market for a while are finding positions at a rapid rate. For every seven people who enter the labor force, five find work before they can file for unemployment. This is a much better ratio than in the last two economic cycles.

The November jobs report was impressive by almost any measure. The U.S. economy continues to produce steady opportunities for work, and additional workers continue to be found. The report provided an early Christmas present to a number of groups. The Fed can be confident when deciding to pause cutting rates. The United States’ negotiating position with China is improved. While acknowledging not everyone has the job they want or the salary they desire, families continue to benefit from this long, steady recovery while investors can worry less about the next recession.

Where are the Neighbors from?

It is well known English is the most common language spoken at home in the United States. It is also well known Spanish is the second most common language and ranks second in all but four states. But, what language is number three in each state? The answer largely depends on who was there first or what groups established communities in the state. In a number of states, either Native American languages or early immigrants shaped communication. French is the third most common language in Louisiana. The tendency for groups to set-up communities in certain states also influenced the rankings. Michigan has attracted a large number of Arabic speakers. Wisconsin’s third language is Hmong, which is spoken by those who emigrated from the hills of Laos after supporting the United States in the Vietnam War.